Meanwhile, there were also wins for Cardiff and for Brighton 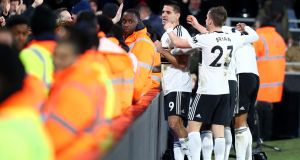 Aleksandar Mitrovic of Fulham celebrates with teammates after he scored his side’s first goal during the Premier League win over Huddersfield Town. Photo: Clive Rose/Getty Images

Fulham boosted their Premier League survival hopes after Aleksandar Mitrovic scored a stoppage time winner to give them a 1-0 win over bottom team Huddersfield Town at Craven Cottage.

The result lifted Fulham one place up to 18th on 14 points from 20 games, two more than Burnley who are at home to West Ham United in one of Sunday’s four fixtures. Huddersfield have 11 points after suffering their seventh successive defeat.

Having had a bullet of a header saved by Jonas Lossl, who also kept out an Aboubakar Kamara penalty, Mitrovic delighted the home fans after taking a Ryan Sessegnon pass in his stride and firing it past the visiting keeper.

Kamara will have been particularly relieved with the outcome as he snatched the ball away from Mitrovic to take the spot kick he earned after Chris Lowe handled the French forward’s attempt to control the ball.

Kamara was booed by the home fans every time he touched the ball in the closing stages and just when it seemed he would be left to rue his ill-judged perseverance, Mitrovic spared his blushes with a superb finish.

Huddersfield launched a dangerous raid at the other end and after Fulham cleared the danger, they launched a quick breakaway move with Sessegnon feeding Mitrovic to rifle the ball past Lossl from just inside the penalty box.

Philippines international Etheridge pulled off a string of fine saves to help earn the Bluebirds a precious victory — their first away in the league this term - in their battle against the drop.

Leicester failed to earn a third successive win after Christmas victories over Chelsea and Manchester City.

Abdoulaye Doucoure came off the bench to salvage a point for a below-par Watford against a Newcastle side which had looked like securing an important away win.

Salomon Rondon, back in the Magpies’ starting XI after being on the bench at Liverpool, hustled the Hornets’ defence all day and his first-half header had appeared enough to have the visitors on course to three valuable points in their fight for Premier League survival.

But Watford, who made six changes from their Boxing Day defeat to Chelsea, roused Vicarage Road as substitute Doucoure headed them level with eight minutes remaining to seal a 1-1 draw.

The £14million Dutchman fired home on the turn from close range in the 59th minute to settle a tight encounter at the Amex Stadium.

Locadia, who registered his first goal of the season in the Boxing Day draw with Arsenal, was initially flagged offside but the decision was overturned by referee Andrew Madley, with replays showing Pascal Gross’ corner had bounced into the striker’s path off Toffees midfielder Andre Gomes.

Everton, who had been the more threatening side in the opening 45 minutes, were unlucky not to level with Richarlison and Kurt Zouma each hitting the woodwork.