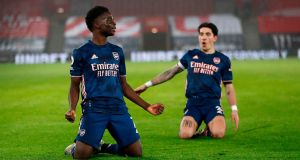 As the wind and rain swirled around St Mary’s, an Arsenal side propelled by the exuberance of Bukayo Saka swept aside Southampton to record revenge and a fifth win in six Premier League matches. At times Arsenal flowed from back to front with the ease of yesteryear and, for Mikel Arteta, this result goes a long way to justifying his weakened selection in defeat here last weekend. Better still, the absent Kieran Tierney should return against Manchester United on Saturday, when the incoming Martin Odegaard could debut.

Four days after Arteta elected to rest a handful of key players in light of the bigger picture, Arsenal returned to the scene of their FA Cup fourth-round exit, with Saka, who brought some impetus off the bench last weekend and Emile Smith Rowe, who was left at home altogether, among five changes. Pierre-Emerick Aubameyang was again absent owing to personal reasons, with Arteta saying the Arsenal captain “needs a little bit of time”.

This game was played at such a frenetic pace one could be forgiven for thinking this was a knockout competition. Southampton took the lead inside three minutes when Stuart Armstrong met James Ward-Prowse’s corner to send a rasping half volley beyond Bernd Leno. Jack Stephens’ dummy run fooled Pépé and Armstrong thundered towards the penalty spot to finish. Eight of Southampton’s past 10 league goals have now stemmed from set plays.

Arteta acknowledged defeat in the Cup exposed much room for improvement but for the Southampton pair stepping into the boots of regular full-backs Ryan Bertrand and Kyle Walker-Peters, who were missing through suspension and injury respectively, this proved a cruel lesson. Yan Valery was caught the wrong side of Pépé for Arsenal’s equaliser and on the opposite flank Jake Vokins was caught cold by Saka’s incisive run six minutes before the interval. Before that, Cédric Soares crashed a volley just wide and Armstrong went close with a curled effort after Leno made a superb right-hand save to prevent Che Adams from heading in at the front post.

This was the third meeting between these sides in six weeks and there was a sense of déja vu in the manner in which Southampton presented Arsenal with a flurry of early chances. First, Jan Bednarek was guilty of gifting possession straight to Granit Xhaka, who sent Alexandre Lacazette clear through on goal inside 50 seconds, only for the returning Alex McCarthy to deny the striker and Arsenal’s equaliser also stemmed from another sloppy pass out of defence. Stephens squandered possession cheaply, allowing Saka to retrieve the ball before Xhaka effortlessly played in Pépé, who kept his cool to send a crisp finish across goal and into the far pocket of the Southampton net.

Carlos Cuesta, the Arsenal assistant coach perched behind the away substitutes, relentlessly encouraged Soares, Smith Rowe and Lacazette, in particular, to squeeze the Southampton back line into awkward holes. When Arsenal seized the lead before half-time, Xhaka was again the catalyst, feeding Lacazette, whose exquisite first-time pass slipped in Saka, who rounded McCarthy before passing into an empty net.

The former Arsenal winger Theo Walcott sent a stinging shot at Leno five minutes after the break and the German goalkeeper had to be alert to scare off Danny Ings in the second half. Ings danced into the box and breezed beyond Thomas Partey, Hector Bellerín and thn Rob Holding but, at the byline, the Southampton striker was greeted by a towering Leno. Willian replaced Smith Rowe with 20 minutes to play but the worry for Ralph Hasenhüttl remained taming Saka, who sent a curling effort wide. They had been warned and, moments later Saka supplied Lacazette, who converted from close range after Soares freed Saka in acres of space.

David Luiz dangled a leg at a hopeful kick downfield by McCarthy that cut through the Arsenal spine but Adams failed to punish the Brazilian after racing through before Leno smothered. Ward-Prowse struck fear into Arteta’s back line after sizing up a free-kick from the edge of the box late on but Arsenal eked out victory against a stretched Saints side. Arsenal leapfrog Southampton to soar to eighth, although almost all of those above them have games in hand. - Guardian