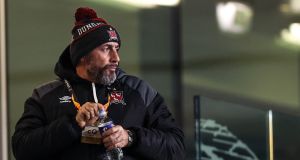 Dundalk have been fined €50,000 by Uefa for having head coach Filippo Giovagnoli in the technical area during Europa League matches despite the fact the Italian does not have the relevant qualifications.

Uefa require managers to hold a Pro Licence for European competitions which is why Dundalk opposition analyst Shane Keegan has been filling the role for their group stages matches. Keegan has the relevant licence but Giovagnoli hasn’t yet acquired it.

However, the Italian has been in the technical area for a number of the Lilywhites’ group matches, including the loss to Arsenal at the Emirates and the 4-3 loss away to Rapid Vienna.

Last week he was forced to sit in the stand for the home match against the Austrians and Uefa have now issued a fine to the club for “shadow coaching” offences in those earlier group matches.

Giovagnoli will now not have any direct involvement for Thursday’s game against Molde or next week’s meeting with Arsenal in Dublin.

In a statement the Uefa Control, Ethics and Disciplinary Body said they have opted to “ban Filippo Giovanogli from carrying out any function of head coach” or “sit in the technical area during Uefa competition” until he obtains the necessary qualifications.