Napoli do the Italian job on Liverpool with late double 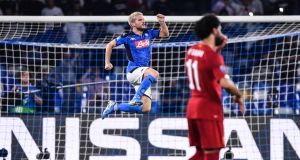 Liverpool will not mind should history repeat itself and another late defeat in Naples eventually end with Champions League glory but this was a dispiriting start to their defence of number six. Jürgen Klopp’s team were vastly improved on last season’s poor display here and on top when Giovanni Di Lorenzo darted into their penalty area in the closing stages. Andy Robertson’s clumsy foul brought familiar pain at the death.

Dries Mertens converted the 82nd minute penalty to leave the European champions with no reward for their improvement. This was an engrossing affair, with defenders and goalkeepers to the fore, but it turned into a miserable night for Liverpool when a rare error from Virgil van Dijk enabled Fernando Llorente to seal Napoli’s victory in the final seconds.

Liverpool’s participation in the Champions League was at risk when they met Napoli in the final group game of last season but that was a rare example of jeopardy appearing at this stage of the competition. As Klopp’s team demonstrated, it is possible to lose all three group games away from home and still win the Champions League. But the holders had something to prove on their return to San Paolo Stadium, having produced their worst performance of an otherwise triumphant campaign here last October.

Carlo Ancelotti outfoxed Liverpool that night with two No 6s and a central defender, Nikola Maksimovic, at right-back. This time the coach who has won and lost Champions League finals against Liverpool opted for a more offensive approach, with Hirving Lozano partnering Mertens up front and Lorenzo Insigne, the captain and the match-winner here last season, targeting Trent Alexander-Arnold down the Napoli left. It made for an open and highly entertaining contest between two teams willing to commit forward in numbers at the earliest opportunity. That it remained goalless so long stemmed in no small part from the quality of the four central defenders on display.

Kalidou Koulibaly is to Napoli what Virgil van Dijk is to Liverpool and the hosts’ defensive rock was the game’s dominant force in the early stages as he halted dangerous raids from Roberto Firmino and Mohamed Salah. The timing and power of his challenges brought regular roars of approval from the home crowd. Allan was also called upon to make a crucial interception on Salah after a deft touch by Sadio Mané almost sent the Egypt international clear from a Napoli corner. With Fabinho equally impressive in central midfield Liverpool frequently created the space in which their front three usually wreak havoc. Koulibaly, Kostas Manolas and their fellow defenders were having none of it, however, and Alex Meret in the Napoli goal had only one save to make in the first half. That stemmed from Insigne losing the ball to Jordan Henderson deep inside his own half. Henderson released Mané on the left but Meret saved the striker’s low shot with his legs.

Adrián, making the first Champions League appearance of his career at the age of 32, had earlier produced a fine double save to prevent Fabián Ruiz driving the home side into the lead.

The Liverpool keeper parried the midfielder’s powerful shot at full stretch and repeated the trick when the rebound gave Fabián a second bite. Lozano headed home from Adrián’s second save but was clearly offside and his celebrations were correctly short-lived.

Fabián was given another opportunity from one of several inviting crosses by Mertens but volleyed back across goal, and into the path of Van Dijk, when the shot was on. Another Mertens cross from the right appeared destined for the head of Insigne only for Joël Matip to intervene with a vital touch.

The game continued to flow both ways. James Milner skied over after Salah had escaped Koulibaly’s attentions for the first time and teed up the midfielder on the edge of the penalty area. Milner almost returned the favour when Liverpool broke dangerously through Henderson and Mané but, with Salah lurking unmarked at the back post, his low cross was cut out by the sliding Mário Rui. Firmino headed the subsequent corner from Salah just wide.

Neapolitan heads were in hands early in the second half after Adrián produced a stunning save to prevent Mertens making the breakthrough. Liverpool were prised open when Insigne released Mário Rui down the left – Alexander-Arnold received little protection all night – and the full-back floated a delightful cross to the back post that evaded Van Dijk and Mertens met with a flying volley. The Belgium international was imagining his goal celebration when Adrián somehow tipped over a shot that was destined for the top corner at close range. Mertens was left in disbelief instead.

Liverpool should have capitalised when Mané beat Insigne to a clearance from a Napoli corner and led to a two v one break deep into the home half. Salah was begging for the ball inside. Mane delayed, delayed and eventually overhit the pass into his unmarked teammate. Unlike at Burnley, it was Mané offering apologies this time. Salah did get his chance to beat Meret moments later when Manolas miscued an attempted clearance from Koulibaly’s header.

The ball dropped invitingly for Salah who swept a left-footed shot towards the bottom corner only for the Napoli goalkeeper to make a superb finger-tip save.

Ancelotti sought a response, introducing Piotr Zielinski for Insigne and to a chorus of boos from the home crowd, former Tottenham striker Fernando Llorente for Lozano. - Guardian

1 Betting shops face uncertain future as they prepare for Monday reopening
2 Timo Werner giving up on Liverpool dream on path to being truly wanted
3 Ian O’Riordan: An education in race and running during college days in America
4 Tianna Bartoletta: ‘After you’ve gotten your medal, you become black in America again’
5 Mature Ringrose keeping the ups and downs of rugby life in perspective
Real news has value SUBSCRIBE