Argentinian breaks City’s scoring record in away win over Napoli 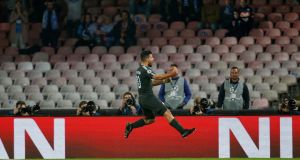 It was a night that will go down in history in more ways than one as Sergio Agüero wrote his name into the record books by registering his 178th goal for Manchester City to move one ahead of Eric Brook and become the club’s all-time leading scorer.

That goal proved to be one of the defining moments in a thrilling game that ended with Pep Guardiola’s side becoming the first English club to win at Napoli, securing their place in the knockout stage of the Champions League in the process and showing once again why they are arguably the outstanding team in Europe on current form.

Headers from Nicolás Otamendi and John Stones had turned the match on its head after Lorenzo Insigne put Napoli ahead following an explosive start from the Serie A leaders. Jorginho then hauled Napoli level from the penalty spot but at the club where Diego Maradona remains such an iconic figure, the script was written for Agüero to finally break Brook’s 78-year-old record. Raheem Sterling then added a fourth and his 10th of the season as City inflicted Napoli’s first home defeat since Real Madrid won here in March.

This was always going to be a fascinating contest, especially as the home team badly needed a victory to reignite their hopes of qualifying for the last 16. Napoli simply had to attack and they did so brilliantly in the opening 20 minutes, dominating possession during that spell – a rare sight against a Guardiola team – and causing City enough problems to suggest that a breakthrough was imminent.

Guardiola was a picture of frustration on the touchline, wildly throwing his arms around and unable to conceal his despair as his players carelessly gave away the ball and struggled to contain a Napoli team that were particularly dangerous down the City left flank. Marek Hamsik was hugely influential during those early stages and it was a lovely pass from the Slovakian that released Dries Mertens into the City area in the 13th minute. With the angle against him and Ederson quick to come off his line, Mertens shot tamely into the goalkeeper’s arms.

The warning signs were there for City and it was no real surprise when Napoli took the lead. It was a wonderfully-worked goal that carved City’s defence wide open and featured a lovely interchange between Insigne and Mertens. Kevin De Bruyne was initially marking Insigne but he didn’t track the winger when he swapped passes with Mertens, whose delightful flick with the outside of the boot picked out his team-mate’s darting run. Insigne still had much to do but he showed composure and a touch of class to clip the ball over Ederson and into the far corner.

Napoli were in total control at that point, yet the complexion of the game totally changed around the half-hour mark and on the back of a couple of incidents. First Napoli lost their impressive left-back Faouzi Ghoulam to injury and then Sergio Agüero was involved in a spat with Kalidou Koulibaly that seemed to spark the Argentinian and City into life.

Within seconds of that flashpoint, Agüero got away from Koulibaly with a sumptuous touch that released De Bruyne, who was able to run with the ball to the edge of the Napoli area. De Bruyne fed Raheem Sterling on the right and the winger’s low cross was met by Agüero, whose shot looked to be heading in until a deflection off a Napoli defender took it wide of the post.

City, however, did not have to wait long for their equaliser. De Bruyne’s short corner picked out Ilkay Gündogan, who delivered a diagonal cross towards the far post where Otamendi towered above Elseid Hysaj to head home. City were now buoyant and only the width of the crossbar prevented Stones from heading the visitors in front before the interval.

Napoli were not so fortunate early in the second half. Having already threatened through Sterling’s sinuous run, City took the lead when Stones struck the bar once again with a header – this time from Leroy Sané’s corner – and the ball bounced down and over the line. Napoli, however, were far from finished. Insigne cut inside and thumped the crossbar with a 25-yard shot and then came the penalty that Jorginho coolly converted after Sané had brought down Raúl Albiol.

Napoli were now pushing for a winner – José Callejon was denied by an excellent Ederson save – and it was that desperation to score again that left room for City to counter-attack superbly. Sané sprinted clear from just inside his own half and although Hysaj got back to make a challenge, the ball ran loose to Agüero, who expertly placed the ball wide of Reina. Sterling, drilling home De Bruyne’s pass, added the coup de grace. – Guardian service