Young Muslim woman to play rugby while wearing her hijab 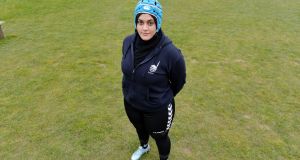 Ruba Rosalina Bukhatwa: “With my scarf on they know I’m a Muslim and I love that. It’s a good thing.” Photograph: Alan Betson

Most sports bodies, and the IRFU is no different, can make for an easy target.

Slow moving and cautious, the union drew praise recently for its speed. An unusual request on performance attire, something on which they are extremely particular, arrived on the desk.

It came from Tallaght Women’s RFC and regarded a new player, who had expressed an interest in joining and playing her rugby there.

Ruba Rosalina Bukhatwa, known to her team mates as Rose, whose Libyan parents moved to Dublin, where she was raised as a Muslim.

The request to the IRFU was that, as a Muslim, Rose wished to play competitive rugby while wearing her hijab.

The traditional hijab is a significantly sized scarf that covers all of the head and leaves the face exposed.

Within four weeks the IRFU had responded to Tallaght Rugby Club’s request saying they would permit Rose to play wearing her hijab with some minor stipulations. It was an interesting breakthrough for Irish rugby, and Sport Against Racism Ireland (SARI).

If Rose continues to train and play with the rugby club, which looks likely, she will be the first woman in Ireland to compete in the game wearing a hijab.

“We are from Libya, ” she says. “My parents moved here when I was around two years old.”

Now 18-years-old, Rose was brought up as an orthodox Muslim.

“I wore the scarf at the age of nine. I was in fourth class and was always getting asked questions, which I didn’t know the answer to at the time. But I was just excited to wear it.

“I was never shunned out of playing sports. But when I went to Santry for athletics, where I did shot put, discus and javelin, people were more impressed than anything by it. I never got any bad comments about it.”

The confirmation that it was okay to wear the hijab was dependent on it being securely fitted and tucked into and underneath her jersey.

The IRFU also advised that Rose should wear a scrum cap over it to ensure that any lose parts stay close to her head and secure for the duration of the game.

Rose went to Santa Maria school in Rathfarnham and was a keen basketball player and involved in track and field.

“My face is showing. If people look at me without the scarf they say ‘oh you must be Italian, you look Hispanic’. I get that all the time but with my scarf on they know I’m a Muslim and I love that.

“It’s a good thing. It’s for modesty and everything that comes with it. It’s the best thing and I do refer to my god. You know there are certain things you are told to do and you just do them. It just one of the rules we have. You must be modest and you must cover yourself.”

On the pitch though It might be a different matter, although, with the scrum cap secure and the other pieces of the scarf tucked in so that nothing is available to grab, comfort after running for 80 minutes might be the only issue.

She did try to play rugby in school when she was younger but there were not enough other girls schools around Dublin playing the game and it worked against them.

“I can wear the scarf they said but it has to be tucked in for safety reasons,” she says.

“It has to be tucked in so that no one can tug at it. When I went to the first training session it was interesting. I didn’t have any contact with my face or neck so it was grand.

“No one’s grabbing at your neck. There was no problem with it whatsoever.

“The problem when we were playing in school was that we didn’t have enough secondary schools to compete against so it wasn’t something I got to practice.

“I played basketball and I did athletics and went to Santry and stuff. It was pretty basic. But now I’m playing with Tosin (Omiyale) on the team and it’s pretty good to be back playing sports.”

Many of Rose’s extended family, especially on her mother’s side, remain living under harsh conditions in war-torn Libya, a nation that has been riven by prolonged conflict in recent years.

However her immediate family, a sister and two brothers, live in Dublin.

“It was like a fashion statement at first when I was young,” she says.

“But when you grow older you learn more. For me I like the fact that I can represent Islam.

“Hopefully next year when I graduate I’ll be the youngest graduate with a Law degree and I want to go on to be a solicitor or maybe even a barrister.

Whatever I do I want to make sure it is a good representation of my religion,” she concludes.

1 Getting behind the rotten core of rugby with Dan Tuohy
2 Football fan survey: Almost half of Irish adults say they support a club
3 Irish squad in the dark as clouds hang over Six Nations
4 Leeds goalkeeper Casilla given eight-game ban for racism
5 Larry McCarthy to become first overseas president of the GAA
Real news has value SUBSCRIBE