Munster pay respect to Connacht with a season’s best showing 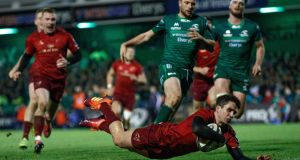 It’s a measure of Munster’s heightened respect for Connacht that not only did they arrive in Galway locked and fairly loaded for this finale to the three-series festive programme of interpros, but they produced their best performance of the season as well.

It’s also says much about Connacht’s improvement this season that despite losing prop Denis Buckley to a stomach bug on the day he was to have made his 150th appearance, in addition to Bundee Aki and Jarrad Butler, that Munster needed to be right on their game.

From the moment that the selections were unveiled on Friday lunchtime, Andy Friend had a fair idea what Munster were bringing up the M18.

“We saw the team come out and we went: ‘righto, there you go fellas, they are respecting you’. Which is good. You want that. But again I thought our blokes stood up to that and gave it their best shot.”

Connacht did that and more, laying down the gauntlet at the start of each half through a big defensive set which culminated in Tom Farrell ripping the ball from Arno Botha and scoring from halfway, before then putting the lively Cian Kelleher away.

They also withstood all manner of heavy duty blows from Munster to secure a bonus point when Farrell and Colby Fainga’a offloaded in turn for Jack Carty to score from 40 metres out.

However, with Conor Murray using all his experience, Munster saw out the end game calmly to stifle the hopes of most in an 8,124 capacity crowd of the most improbable of draws.

In truth even before unleashing Murray, CJ Stander, David Kilcoyne et al off the bench for the last half-hour, the foundations of Munster’s win had been laid by their clinical response to those early Connacht tries in each half.

Joey Carbery, very assured in all he did and, like Carty, 100per cent off the tee, along with Dan Goggin, Chris Farrell, effective in pretty much everything he did, and Alex Wootton, all found space in behind with clever kicks. Whether forcing an attacking throw or forcing Connacht to exit, this allowed Munster to get their heavyweight pack rumbling, especially through their potent maul.

It also led to tries by a rested and re-energised Peter O’Mahony, who was immense and, as usual, came up with a host of big plays, and a brace by Goggin, each set up by Alby Mathewson.

The introduction of Tyler Bleyendaal allowed Munster to give Carbery the final quarter at fullback, and following more rumbling by the pack he reveled in the space this afforded him to score off Bleyendaal’s cut-out pass for the bonus-point try.

Johann van Graan hailed Munster’s sharpened ability to take their chances and their accuracy. “I thought our maul went really well tonight and that bought us penalties and Joey kicked it to touch. It buys you field position and I thought we were pretty clinical in the 22 and both nines and 10s managed the game pretty well down there.

“We didn’t over play. Once their defence was up we turned them and put pressure on their lineout, they kicked it out and we went again. So, the game management was pretty good tonight.”

Munster enjoyed a 61 per cent territorial advantage in the first half, and 53 per cent in the second. Friend and his coaching ticket like to keep the ‘learnings’ from any game to one or two, and here the lesson was not only clear but applied a little in the second period.

In a high quality game on a perfect night for rugby, Connacht stayed in touch thanks to some big defensive shifts, notably by Gavin Thornbury (19 tackles), Paul Boyle and Fainga’a (18 apiece) – although these were all eclipsed by the ravenous Tommy O’Donnell (22) on his return from injury.

While Munster had more ballast up front, and Tadhg Beirne complemented O’Mahony’s work at the breakdown, Connacht were always a threat on the ball. They conjured 10 line breaks to six, the first by the debutant Tom Daly, one of six Connacht players honed for the pro game by Lansdowne, who slotted in very well.

In Tom Farrell they also had the game’s most potent player. In scoring one and being the creative force for the other two tries, Farrell made 101 metres from 14 carries, making two line breaks and three offloads, and beating four defenders.

“I thought he was dynamic again today,” said Friend. “The bloke inside him, on his first cap, was good too. It’s nice to have Tom Daly, but Tommy Farrell, every time he touches the ball he’s a handful. He’s playing some good rugby.”

Asked at what point did he realise he had a bit of a gem in Farrell, another of those ex-Lansdowne men, Friend said: “Pretty early on, but we have a lot of gems. This bloke here beside me [Boyle] is a gem too. We’ve got young Bladey [Caolin Blade], who has been a gem all year. Jack Carty has been a gem. We’ve got some real beauties across the team, so it’s a team of gems, honestly, and we’ve just got to keep polishing them and giving them the confidence to play and they’ll keep producing some of the footy they’re playing.”