Pro12: Ulster made to work hard for victory as Scarlets earn losing bonus 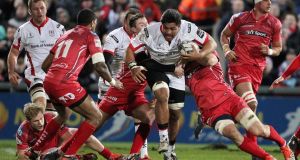 Ulster’s Nick Williams on the charge against Scarlets at Ravenhill. Photograph: Brian Little/Inpho.

Ulster 25, Scarlets 20: Ulster racked up a fourth consecutive Pro12 victory as they continue to propel themselves towards the ultimate aim of the play-offs but it was far from straightforward at Ravenhill.

Indeed, Ulster had to battle back after trailing 13-6 at the break and three tries – from Craig Gilroy, Luke Marshall and Ruan Pienaar – seemed to set them up for a maximum five-pointer to take them top of the table.

But it was not to be and though Pienaar ended up with a 15-point haul, there was no try bonus and it was the Scarlets who had the final say with Kristian Phillips’ 78th minute try and Steven Shingler’s conversion bagging them a very valuable losing bonus.

It was an edgy start from both sides on a blustery night with Shingler missing with his first penalty effort but he nailed his next chance on 13 minutes. Pienaar got Ulster off the mark after the visitors were penalised for lowering a scrum but four minutes later Shingler had nudged the Scarlets in front again at 6-3.

Shingler added the extras and three minutes later the sides trooped off with the Scarlets leading 13-6.

Six minutes after the restart Ulster got a break when, after Shingler kicked to the wing, Gilroy collected and beat three defenders to score in the corner.

Ulster took the lead for the first time when Humphreys found Marshall running a strong line and he barged over.

Pienaar converted and Ulster led 18-13. That became 25-13 just before the hour when Pienaar raced over and also converted.

It looked as if the Scarlets would probably concede again but they hung in there and right at the death Phillips got over.

1 Seán O’Brien: Anger over my parents’ break-up never left me
2 Will Connors chops his way to the front of Ireland’s openside queue
3 Munster earn bank holiday bonus in entertaining Thomond Park tussle
4 Gibson-Park, Earls and Kelleher all in race to make Ireland’s French finale
5 The Offload: Outgoing Tom Grace will be missed by IRFU
Real news has value SUBSCRIBE