Paul O’Connell plans his future in a Munster shirt

Ireland captain wants to play beyond the next World Cup 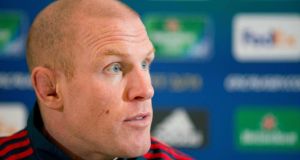 Paul O’Connell says he wants to play on beyond the World Cup in 2015 and that he is hopeful of signing a new Munster contract that will keep him at the province for the immediate future.

O’Connell is in the middle of “delicate” talks with the IRFU to extend his current deal which runs out at the end of this season, and while there has been talk of a possible move abroad, O’Connell hinted his preference was to follow Conor Murray’s lead and remain with his native province.

“Hopefully [I will sign a new Munster deal]. Look my contract – I’m trying to figure out my future at the moment and it is kind of delicate. It’s not something I want to discuss,” said the Ireland captain yesterday. “I don’t really know. I’d probably like to play up to the next World Cup and that season as well. I’d see where I am after that. If the body is in good shape I’d like to keep going after that. It all depends.

Murray contract
O’Connell joined all of his teammates in welcoming Murray’s two-year contract extension, but coach Rob Penney said was delighted to see his Lions scrumhalf commit his short-term future to the province, despite the ongoing nature of Penney’s own contract discussion.

“No [it’s not a problem] because you just buy into the organisation. You just watch the lads and you want the best for the organisation, the best team that you can be – whoever’s coaching here – for this group to kick on. So, no, it’s not even an issue as far as I’m concerned,” Penney said.

“I’m delighted that Conor is committed here, committed to Ireland, which is just wonderful for everybody. It certainly helps us for our planning in Munster and having someone of Conor’s ability and credibility and talent is a big bonus to us.”

The Munster coach confirmed Tommy O’Donnell is in contention to play against Perpignan this weekend following his comeback from a knee injury with the Munster A team last weekend, while a return for Donnacha Ryan is not likely but is “not out of the realms of possibility”.

Prognosis
Penney also said the six-week prognosis for Murray’s knee ligament injury was at “the worst end of the spectrum”, but he did admit that the signing of Robin Copeland is a huge coup for the province.

“Well certainly given the performances that we have seen and the esteem in which he is help by the teams over there in Wales, particularly Cardiff. It probably wasn’t something that we were expecting.

“He has probably got green blood running through his veins, he would love to play for Ireland, that is his dream now and it probably something that has a little time, that epiphany, that realisation, that this is what he wants to do.

“And if that is driving him on then we are going to be able to provide him with a framework and a group of guys that is going to enhance his ability. We got a talented man who will be able to help out our backrowers because of his maturity and someone that will also add a lot of value to our team no matter what position he will be able to fill,” he said.

And after Mike Sherry’s season-ending injury, Penney also confirmed that he will not be seeking to bring in another hooker to his squad, after Duncan Casey impressed last weekend.

“Yeah, we were always excited about Duncan Casey, and Niall Scannell’s been playing for the As and Ireland Under-20s. We won’t be looking outside the group at this point, unless we have another disaster somewhere,” said Penney.