Irish rugby players to be part of concussion group lawsuit 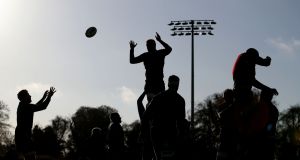 Many of the players involved are former internationals from Six Nations Championship unions, all of whom sustained head injuries. Photograph: Dan Sheridan/Inpho

A company recently set up in London has written to up to 10 Irish rugby players seeking their permission to be included in a group lawsuit with over 70 other players from around Britain.

It is believed that Irish players are not involved in the first block of cases the company is taking against World Rugby, the Rugby Football Union and the Welsh Rugby Union.

However, according to a source in London there will be Irish involvement in the next wave of suits with the IRFU expected to become embroiled in future litigation.

The group lawsuit pertains to concussion the Irish players suffered during their playing careers. All of them have now retired due to concerns over the lasting effects of repeated brain injury.

“We have had no contact,” said the IRFU in an email yesterday when asked if they were aware of pending litigation.

Many of the players are former internationals from Six Nations Championship unions, all of whom sustained head injuries and suffered from typical concussion symptoms of migraine, loss of memory, insomnia and depression.

The emails, sent to the Irish players last summer say how a new law firm, Ryland Legal Limited, put together by solicitor and director Richard Bordman, were setting up in London and were in the process of putting together a large legal action against various governing bodies to seek damages for retired players in relation to the brain injuries they had suffered.

“We have over 70 former players, including 10 from Ireland, showing symptoms suggesting neurological complications, such as migraines, loss of memory, insomnia, depression and an inability to concentrate. Once we go public, we believe we will be looking at an epidemic.

Dr Allder is a Consultant Neurologist at Re:Cognition Health. He is currently using his clinical expertise to focus on the assessment of patients with traumatic brain injury. He has sub-specialist interest in acute brain injury, cerebrovascular disease, dizziness and medically unexplained symptoms.

“We have over 70 former players, including 10 from Ireland, showing symptoms suggesting neurological complications, such as migraines, loss of memory, insomnia, depression and an inability to concentrate,” explains the email sent to Irish players. “Once we go public, we believe we will be looking at an epidemic.

“ The reason I write is that I would be keen to speak to you about your own experiences with this issue in rugby.

“Our aims are twofold: 1) to secure financial support for our former players in retirement; and 2) to ensure that current and future players are fully educated on the risks involved in playing, as well as adequately protected. As you know, the NFL has gone through something similar (with a group action), and the sport has never been stronger – nor safer.

“If you fancy a chat, do let me know a convenient time/date and the best way to contact you.”

It is uncertain if any have agreed to participate in the group action.

The cases could change the nature of the way rugby is conducted with demands to World Rugby also attached to the civil cases. These include limited contact in training, limiting the number of replacements per game, concussion spotters with authority to remove, career-long central database chronicling injury history and the banning of zero hour contracts. They also urge critical research into frontrow forwards by independent academics.

In a class action taken against the NFL in 2012, thousands of players became involved with estimates at a payout set at up to $1 billion.

Ryan is one of the two most recent Irish players along with Ulster secondrow, Browne forced to retire from concussion in 2018. Ryan was 28-years-old and Browne 30-years-old.

It will not be the first time a civil action has been taken in Ireland. A case was initiated in Northern Ireland following the death of Benjamin Robinson from a serious form of concussion, Second Impact Syndrome. The 14-year-old schoolboy did not recover following a series of concussive collisions during a schools rugby match in Carrickfergus Grammar School in 2011.

The named participants in the action were the referee, the school coach, the school, the Ulster Branch, the IRFU and World Rugby. A legal team assembled by World Rugby contested the family’s claims. It ran for six years and finally came to a conclusion in December 2019, when all parties signed a non-disclosure agreement covering precise details.