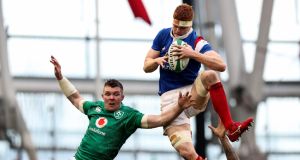 15 Thomas Ramos - Three turnovers in the first half and beaten in the air by Garry Ringrose that could have led to a try; looked spooked and unsure at times under fierce pressure. Rating: 4

14 Damien Penaud - Wild passes, gave away penalty for clumsy challenge in air, conceded four turnovers in a performance he will want to forget. Rating: 4

13 Mathieu Bastareaud - One of the few French players to make a few metres and put in some heavy hits, particularly when France were put to the pin of their collar defensively. He saved them a couple of times. Rating: 6

12 Gael Fickou - A bystander in terms of the game because he got no ball in attack and spent his time trying to contain the Irish midfield. Rating: 4

11 Yoann Huget - He crossed for a try late-on but spent his day trying to shut down Ireland in the wider channel and defending cross-kicks which he managed capably. Rating: 5

10 Romain Ntamack - Missed a couple of tackles as Ireland targeted his channel and spent his time on the pitch playing off the back foot; one or two decent cross-kicks but he was largely spectator. Rating: 4

9 Antoine Dupont - He did brilliantly to deny Garry Ringrose a try, covered diligently in the backfield and but for him the visitors might have been in even more trouble. Living off crumbs, he was limited to the odd cameo on the ball. Rating: 6

1 Jefferson Poirot - It was carnage from an injury perspective for the French as the prop had to be helped off the pitch with a leg injury after just 16 minutes. Rating: 4

2 Guilhem Guirado - He tried to lead by example, working hard to slow down Irish ball, making his tackles but it was like trying to turn back the tide; utterly fruitless. Rating: 6

3 Demba Bamba - One of the few French players to get over the gain-line using footwork allied to power but was stripped by Iain Henderson for Ireland’s third try and conceded two penalties too. Rating: 5

4 Felix Lambey - A huge tackle count (28) and his work-rate and athleticism covered holes left by several of his team-mates; a silver lining on a bleak day for French rugby. Rating: 7

5 Sebastien Vahaamahina - He used his size to shut down Ireland when the home side went the direct route up front and like his secondrow partner racked up a big tackle count. Rating: 5

6 Wenceslas Lauret - Departed injured after 10 minutes after making a tackle. He made more metres in his time on the pitch - five - then the rest of the French pack combined in the first half. Rating: 4

7 Arthur Iturria - He gave away three penalties in the opening half an hour of the game and was lucky not to get a card for persistent offending but couldn’t be faulted for his application. Rating: 5

8 Louis Picamoles - He was sacrificed when the French got a yellow card in the second half but it made little difference as one of the best ball carriers in the game got his hands on no ball. Rating: 4

Replacements: The bench was called upon early because of injuries to Lauret and Poirot. Doran Aldegheri conceded four penalties at the scrum and eventually a yellow card, Gregory Alldritt worked hard. The French scrum struggled hugely with the starting and back-up frontrows. Two tries at the end were of little consolation for the visitors. Rating: 4

Coach: Jacques Brunel - Rewarded his players after the victory over Scotland by retaining the 23 and they responded by producing a disjointed display undermined by indiscipline and reminiscent of the horrors of Twickenham. If Ireland had shown a little more composure and precision with the final pass, they could have racked up 50-points, such was their dominance. The boos that rang out as the team acknowledged their supporters won’t have been lost on anyone. Rating: 4

1 The unsolved mystery of Goran Ivanisevic’s stunning Wimbledon win
2 The Game Changers: Vincent O’Brien, a pioneer who took Irish racing to the world
3 Tipping Point: DeChambeau’s transformation raises questions, but who will ask them?
4 John O’Sullivan: IRFU must recognise vital role of clubs in rugby's return
5 Dan Carter to return to Christchurch as an Auckland Blues player
Real news has value SUBSCRIBE