Six Nations 2018: the team of the tournament so far 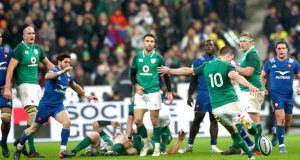 15 Matteo Minozzi
A rare bright spot in what has been a thoroughly miserable Championship for the Azzurri. The impish fullback has impressed in all three defeats, finishing neatly against Ireland and France.

14 Keith Earls
Jacob Stockdale might be taking all the glory on the other wing but Earls, an old-timer in comparison, has been efficiently solid throughout. Just the one try so far but he has been dominant in the air and typically twinkle-toed in attack.

13 Huw Jones
The Scottish 13 has been a revelation, and is delivering on the promise he showed last autumn. He is excellent at picking a line and has the pace and power to punch through defences - he’s scored three tries and he made a staggering 115 metres in the win against England.

12 Bundee Aki
Injuries to Robbie Henshaw and Chris Farrell mean Aki is likely to be playing with his third midfield partner against Scotland - but already he is arguably the centre Ireland can afford to lose the least. Pace, power, intelligence and the softest of hands, he is Ireland’s own All Black.

11 Jacob Stockdale
At 21-years-old and with eight tries from just seven Test matches, it’s safe to say Stockdale is living the dream. He has picked up where he left off last November, with his electric finishing seeing him lead the try-scoring charts with four. His defence will improve with experience.

10 Johnny Sexton
The general, the master. From his last second drop goal against France to his sublime display with the ball in hand against Wales, Sexton is currently the world’s best outhalf. The one player Ireland can’t afford to lose.

9 Conor Murray
One half of the world’s best outhalf pairing, Murray has been a steadying presence over the first three rounds, marshalling a new-look pack and giving typically fine distribution to an improving back line. Even took over the kicking duties with aplomb when Sexton got the yips against Wales.

1 Mako Vunipola
Met his match in Simon Berghan as the Scottish scrum held firm but Vunipola delivered a monstrous performance in round two, making a huge 17 tackles and 14 carries from loosehead as England battled to a 12-6 over Wales. Honourable mention goes to the returning Cian Healy.

2 Ken Owens
Was particularly impressive against England in round two, hitting his target in all 15 of his lineouts at a greasy Twickenham. Struggled to assert his usual influence over the ball against Ireland, but he was a constant thorn in the side of Scotland and the English on the deck.

3 Andrew Porter
Called into action in the opening stages of Ireland’s win over Italy, Porter has ably filled the gap left by the injured Tadhg Furlong. A starting berth against Wales in the Six Nations is as stern a test a 22-year-old converted tighthead is likely to get but he passed it with flying colours.

4 Alun Wyn Jones
Wales came into the tournament shorn of the majority of their stars so needed the leadership of their old war horse more than ever. Helped steer a new-look side to a thrashing of Scotland and was inspirational in the ultimately doomed attempt to raid Twickenham.

5 Jonny Gray
The numbers speak for themselves. Gray made 15 tackles in defeat to Wales, 14 in the win over France, and a staggering 24 in the historic victory over England. A towering presence in the engine room for Scotland.

6 Aaron Shingler
Rangy, pacy and brilliant over the ball, the 30-year-old Shingler has waited a long time for a consistent run in the Wales team but he is taking his belated opportunity with both hands. Scored a good try against Ireland, and his break against England will live long in the memory.

7 Dan Leavy
The future’s bright. Like Porter negating Furlong’s absence, Leavy has been so impressive Ireland have flourished without the injured Seán O’Brien - something which has been unthinkable in the past.

8 John Barclay
In the absence of a standout number eight Scotland captain Barclay moves across from blindside. Saw his team fail to fire in the opener against Wales but has been pivotal in their resurgence since, and had mammoth games against both France and England.