Sexton back to his imperious best in sun-kissed Roman romp 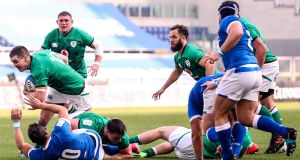 An inspirational Johnny Sexton in action for Ireland against Italy during the victory at the Stadio Olimpico in Rome. Photograph: Tommy Dickson/Inpho

Tadhg Beirne, or ‘Tag’ as Dewi Morris insisted on calling him pitchside in his post-match TV interview, admitted that his man of the match award might have had something to do with being credited for some of Will Connors’s tackles given their matching blue headgear.

Johnny Sexton felt Robbie Henshaw, maintaining his rich vein of all-action form in defence and attack, was the best player on the pitch.

It was that kind of day, when a host of old reliables (a category to which even James Ryan and Garry Ringrose now fall into it, as well as Tadhg Furlong and the indefatigable and indestructible CJ Stander) reminded us of their importance.

But none more so than Sexton himself.

Forgetting his age and contractual position for once, and instead concentrating on what a world-class outhalf and leader he is, it’s hard to understate his influence on this team and this performance.

He had a big hand in four of Ireland’s six tries, even the first when feigning to take Jamison Gibson-Park’s pass before pulling his hands back, thus doing enough to delay Carlo Canna drifting on to Ringrose as the Irish centre powered through him on the outside.

The second try was an illustration of the heads-up identification of space which Andy Farrell and Mike Catt are looking for as Sexton switched to the blindside off a maul inside halfway.

Running straight, Sexton beat Callum Braley’s tackle and released Jordan Larmour with a perfectly delayed pass, took the hit, rose to his feet and then was in place to take the pull back from Ryan and hit Ringrose for his deft footwork and offload to meet Hugo Keenan’s superb line from deep. The master puppeteer at work.

For the third try, this time it was Rónan Kelleher who deftly pulled the ball pack from the three-man pod. Sexton again ran hard at the gainline and his delayed pass not only saw him take another hit but allowed Larmour to angle his run and produce another offloading try-scoring assist out of a double tackle to Connors.

Pack power accounted for further tries by Stander and Connors in the second half before, entirely fittingly, Sexton had the final say when taking Craig Casey’s sharp miss pass to put Keith Earls over in the corner by whipping out a skip pass.

Sexton even faded his touchline conversion inside the far post to complete an eight from eight, 18-point haul, thereby matching his tally against Italy last October.

As ever, he relished the physical challenge, not only taking those hits on the gainline but making his eight tackles, hitting a couple of rucks and even chipping in with a pick and go. He’ll never change.

There were smiles too, even with decisions he disagreed with, as he completed 80 minutes in a green jersey for just the second time in two years.

Sexton was the first to admit that this inventive, ambitious and clinical performance was founded on Ireland’s “excellent” pack. Not only were the set-pieces solid, but the big carriers frequently won the gainline as Ireland benefited from coming onto the ball at pace rather than taking it statically.

But, aside from his own contribution, one can only imagine how profound Sexton’s return to captain the team had been.

“But Johnny has been world-class at that for most of his life and most of his career and that’s why he is where he’s at. He’s led outstandingly well and he’s made the group feel really good about themselves this week.

“He’s also influenced others to step up to that plate and they’re growing. The leadership is growing but the individuals within the group are learning that lesson as well.”

Ireland’s defence was another striking feature of the game, not least the strong set they put in before Keenan’s superb try, Ryan leading the way with 19 tackles (and none missed) followed by Connors, who energises defences with his work in the line.

His chop tackling and ability to spring to his feet, once deftly scooping up the ensuing loose ball, was even more striking than his brace of tries.

In truth, Ireland should have eclipsed France’s 50-10 win here in round one, but were pinged for blocking at two attacking lineouts and slightly lost their edge with the game won and bonus point secured by the 43rd minute.

“The game got pretty stop-start didn’t it, with scrums and penalties slowing things down a little bit at times,” said Farrell. “There was a lot of penalties within the maul and in the lineouts.

“I thought the first half, we punched and we were direct and was connected in our attack. I suppose when they go down to a yellow card and then another one and it’s stop-start and there’s space a little bit everywhere and you become a little bit lateral from time to time and so a little bit of continuity just went out the window.”

Even so, Ireland also had three disallowed tries by Iain Henderson (wrongly), Stander and James Lowe (both marginally), and Lowe’s potent running deserved a try.

Of course, this latest, sun-kissed Roman romp – Ireland’s 10th in 11 visits to the Eternal City – has to be put in context. For all their attacking adventure, Italy have now conceded 19 tries and 139 points, and missed a lamentable 85 tackles in just three games.