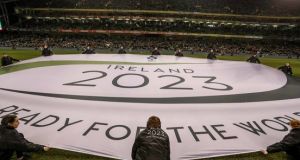 Ireland’s hopes of winning the backing of World Rugby’s Technical Review group as the preferred bid to stage the 2023 Rugby World Cup have been dashed this morning as South Africa’s candidature has been endorsed following 10-month review of all three bids.

It is a disappointing outcome for the IRFU, especially given Ireland came last in all but one of the hosting criteria.

South Africa hosted the tournament in 1995 - when the Springboks lifted the Webb Ellis Cup on home soil.

World Rugby released the evaluation report to the three competing unions, Ireland, France and South Africa and the World Rugby Council one hour ahead of the public announcement and the fact that the Technical Review Group has supported South Africa’s candidature has seen them take a significant step towards hosting the 2023 Rugby World Cup.

This is only a recommendation and the South African bid must still attract 20 of 39 votes available when the World Rugby Council meet in the Royal Garden Hotel in Kensington on November 15th. A number of countries led by New Zealand have said that they will vote in accordance with the findings of the Technical Review Group.

The NZRU CEO Steve Tew made the valid point that why employ an independent review group to forensically examine all three bids and then go against their findings. New Zealand, one of seven countries with three votes - England, Scotland, Wales, Italy, Australia and Argentina the others - are now likely to support South Africa. It will be instructive if that is the general feeling amongst the unions with three votes. The IRFU must now rely on the work their two International Board representatives, John O’Driscoll and Pat Whelan did in the last year in travelling around the globe to meet with all the unions and federations that are eligible to cast votes in the hope that they will support the Irish bid.

“The Board made its recommendation following detailed consideration of the comprehensive host candidate evaluation report. In line with World Rugby’s mission to deliver a ground-breaking, rigorous and fully transparent host selection process for its showcase event, the report is being published today as agreed by Council.

“The evaluation of the detailed bid submissions has been led by a team of World Rugby and external area experts. This was supported throughout by stringent independent evaluation and analysis from The Sports Consultancy to ensure evidence-based objectivity and consistent application against a set of weighted scoring criteria based on the following World Rugby objectives, which were agreed by the Board, noted by Council and communicated to the host candidates.

“They were venues and infrastructure commensurate with a top-tier major event, comprehensive and enforceable public and private sector guarantees, a commercially successful event with a fully funded, robust financial model, operational excellence through an integrated and experienced delivery team, a vision that engages and inspires domestic and international audiences and contributes to the growth of rugby at all levels , an enabling environment of political and financial stability that respects the diversity of the Rugby World Cup’s global stakeholders and an environment and climate suited to top-level sport in a geography that allows maximum fan mobility .

Meanwhile an IRFU statement from Dick Spring, Chairman of the Ireland 2023 Bid Oversight Board, read: “While It is disappointing not to have received the initial recommendation from Rugby World Cup Board Limited, there is nothing in the report which is insurmountable and this is certainly not the end of the road. We absolutely believe Ireland can secure the tournament for 2023.

“On a first reading of the report, It is clear that the Evaluation Commission is impressed by the quality and detail of the bid put forward on behalf of Ireland. It is also clear from the report that Ireland has all the capabilities to host an outstanding Rugby World Cup in 2023 stating as it does …’any of the three candidates could host a successful Rugby World Cup’.

“Ultimately, the decision rests with the Council Members of World Rugby, who are elected by Rugby Unions from across the globe. These are individuals and unions who have reacted positively to our message and vision for the tournament, as we criss-crossed the globe over the past two years. We will again, in the coming weeks, renew our vision to the Council Members - A commercially successful rugby tournament based on rugby’s values of integrity and camaraderie, played in full stadia in the hearts of towns and cities.

Ireland’s proposition in this regard is compelling, and so our team will compete to the final whistle as we bid to turn our historic bid plans into reality. We still have confidence that the Council members, who vote on November 15th, will place their trust in Ireland to deliver an outstanding 2023 Rugby World Cup.”