RFU defends €220 tickets for England v All Blacks at Twickenham 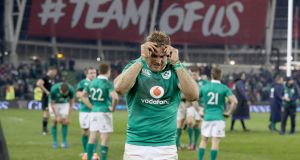 Top-priced seats at Twickenham for England’s blockbuster fixture against New Zealand in November will cost more than €220 apiece with the Rugby Football Union dismissing any prospect of a Test revenue-sharing agreement with less wealthy visiting nations.

“They don’t get a slice because that’s not the way the market works,” Brown said. “Steve Tew got a very nice slice from the Lions tour recently so maybe I should phone him.”

The RFU says it could have sold out its 82,000-capacity stadium 20 times over, such is the demand to attend the England-All Blacks game, but a limited number of £20 child tickets have been introduced to deflect accusations it is pricing out families and youngsters. “It’s the blockbuster, we haven’t played them for four years and the demand is exceptional,” Brown said.

The union also plans to stage one of England’s 2019 Rugby World Cup warm-up fixtures in the north, most likely in Manchester or Newcastle, having been encouraged by the “fantastic” response to England’s 2015 World Cup pool game against Uruguay at the Etihad Stadium. “I was quite surprised with the impact of England playing in Manchester at the World Cup even though it wasn’t a great time for England,” Brown said.

The RFU’s leading officials, meanwhile, are compiling a long list of possible candidates to succeed Eddie Jones as England’s head coach. Jones is assisting with the process which Brown expects to gather pace this summer. “The long list will get short fairly quickly, I’d imagine. There are not 25 people out there who could take that job.”

Despite England’s fifth-place finish in the Six Nations this year, the RFU insists it retains full confidence in Jones to revive the team sooner rather than later. “We’re reassured the plans he has in place are robust and we’re confident they will take us to a good place in 2019,” said Brown, insisting “the stats do not indicate” the Six Nations squad was overtrained. “History tells us that that [finishing fifth] is not the norm for England.”

IRFU chief executive Philip Browne has indicated that category 1 tickets for the All Blacks at the Aviva Stadium on November 17th will be €100-plus.

“Very definitely,” Browne said on The Irish Times Inside Business podcast in January. “We haven’t made any decisions on ticket prices but New Zealand is one of the cache matches in world rugby and everyone would want to see the match.”

Ireland open their autumn campaign against Argentina on November 10th and finish against USA on November 24th. The IRFU are expected to confirm their full ticket price structure to clubs in July.

A previous financial model, where all adult stand tickets were €100, forced a restructuring into five categories, the cheapest seats high up in the east stand currently being €40. A premium seat is currently up to €135 for major Test matches.

Tickets for Ireland’s home Six Nations games this year rose from €70 for Italy to €80 against Scotland, peaking at €90 for victory over Wales.

Hospitality packages for the All Blacks game in Dublin starts at €695. This includes tickets, a four-course lunch and complimentary pre- and post-match bar. Ideally Ireland would play the All Blacks outside the international window – in a repeat of the historic Chicago victory in 2016 – but New Zealand begin their world tour against Japan in the Ajinomoto Stadium in Chofu on November 3rd. On the same day England have secured a Twickenham fixture against South Africa while Scotland face Wales in Cardiff.

Unless a November 3rd Test match can be agreed with Australia, the alternative option is December 1st.