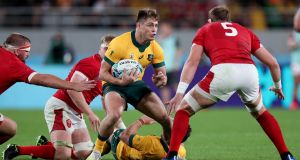 James O’Connor in action for Australia against Wales during the Pool D clash at the Tokyo Stadium, Tokyo, Japan. Photograph: Craig Mercer/Inpho

The Australians are having fun.

Alan Alaalatoa, the team’s 20-stone prop, thought for a second when asked if he could take David Pocock in an arm wrestle. Already, the big Samoan has been queried about which super hero he’d most like to be (Spiderman) and about the heaviest he’s lifted (300 kg, just the other week, with most of the squad watching on).

But he knows that this answer will travel back to Pocock, who may well own the biggest biceps in world rugby.

Beside him, James O’Connor roared with laughter. It’s doubtful if any player is enjoying this World Cup as much as O’Connor, Australia’s former prodigy whose rugby promise and life seemed to go up in flames over five lost years when he was essentially banished from the national team.

Eyebrows were raised a little when O’Connor was invited back to the Wallabies national camp as recently as July. Just over a month later, he started at centre in that landmark 47-26 win against New Zealand.

For Aussie fans with a clear recollection of the 2011 World Cup, the sight of the blond-haired, hugely versatile three-quarters back in the gold jersey must have been wistful. O’Connor didn’t blink when it was put to him that, from the outside, it seems as if he has come back from nowhere.

“I think for me it was more about winning that mental battle – stuff away from rugby to be able to play rugby again at a high level. So being back home . . . it has been great. Emotional at times and a couple of times it’s just . . . what an experience . . .I wanted to be back here but didn’t have the correct path of how to do it.”

O’Connor was the second youngest Australian to ever make the national team when he won his first cap at 18 in 2007 when he was regarded as the elixir of the national rugby team.

And then it all became very messy; a series of disciplinary issues culminated in him getting booted off a Bali-Perth flight and having his Australian contract cancelled in 2013.

He bounced around clubs in England and France but was let go by Toulon when it was arrested for allegedly attempted to buy cocaine just two years ago. In between, he was nowhere to be seen at the 2015 World Cup. The professional game moves on without a backwards glance. He was on the very edge of professional sport but that was the least of it.

To hear O’Connor speaking now, a sunny, articulate and hugely grateful presence in a carpeted function room of the Tokyo Conrad is to hear someone grab a second chance with both hands.

He puts his return to health largely down to his involvement with ‘Saviour World’, a men’s wellness group based in the UK which counts big wave surfer Laird Hamilton and former Chicago Bulls centre Joachim Noah among its members. Their practice involves deep mediation and intermittent fasting and hiking. The group, he says, gave him the stability he needed to get through what he admits were years of intense personal struggle.

“I think everyone has it. All different cultures talk about, you know, the two different sides of your personality – your light and dark wolf, yin and yang, masculine and feminine, all that kind of stuff so yeah.

“There was quite a few and at one stage I’d gone so far in one direction that it was quite hard to turn around and get up in the morning, let alone play professional rugby and get myself in a place where I could compete with the athletes out there in the world. So it was day by day. Literally winning that mental battle of the little small choices and everyone inside them knows when they are making the right choice and when they are not.

“All you have to do is listen to their intuitions. I wouldn’t be here without that, it helped guide and facilitate my whole journey – physical, mental, my soul, everything And I’m just thrilled to be here.”

After starting against Fiji and Wales, O’Connor sat out the win over Uruguay with an injury, leaving an opening for Jordan Petaia, the 19-year-old who made a scintillating debut, scoring a try after just 23 minutes before being replaced, as planned, at half-time. It was natural that O’Connor might see shades of his younger self in the Brisbane teenager’s sudden rise.

“I got to speak to Jordan the night before the game. All I passed on to him was almost what was passed onto me – just focus on your defence and get yourself in the game early and the big moments will come.

“You are going to be very excited and the adrenaline will be flowing. But one thing he does have is that composure – he is quite a calm sort of presence on the field and when he gets on the ball he is game mode. He stays in the moment really well. So possible he was a bit calmer than I was on my debut, that’s for sure.”

But all players want to play. At 29, O’Connor no longer has the scintillating running speed of his days on the wing but he retains the game intelligence and class to have a big influence at centre.

He is expected to start against Georgia on Friday. But Petaia’s rise means that there is one more hand up for selection whenever Michael Chieka sits down to think about his quarter-final team.

“I think we knew Jordan was going to carve it up,” O’Connor says evenly.

“We have seen him at training and he is a freak athlete and his composure for his age is well by anyone of that age level. He had some great touches and good vision, connecting with [fullback] Kurtley Beale well. I wasn’t surprised but it was encouraging. It does put a little pressure on me. But I see my role as a distributor. As much as I have a running game I look to shift it first and foremost.”

For O’Connor, the wheel has come full circle. Eight years after his first and most recent World Cup, he finds himself in the role of advisor to Australia’s new prodigy. Petaia’s elevation to the first team had such a young age brings its own challenges.

“I have spoken to his folks briefly about that sort of stuff. Once he goes back home, things will change for him. But that’s not for now”