Letter from Japan: what can go wrong at this Rugby World Cup, will go wrong 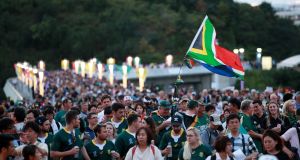 South Africa fans arrive in Shizuoka ahead of their win over Italy. Photograph: Adam Pretty/Getty

What can go wrong at this World Cup will go wrong and so much more besides. Hectic weekend, which was all my own doing.

Only got into Nagoya at 1am but leaving this afternoon (Saturday) for Toyota City. Returning tonight. Just realised the Samoans are around the corner from my Love Hotel so I’ll catch them in the morning before rejoining the Irish wolfhounds in Fukuoka.

Late Friday on exiting a chilly Ecopa stadium, after the Springboks crushed Italy, to sprint for the last locomotive to Hamamatsu to make the last Shinkansen (bullet train) to Nagoya, I was greeted at Aino station by about 500 inebriated South Africans and locals with a similar plan.

Aino is the size of Clontarf DART station. The media badge was abusively flaunted. Queue skipping is an art form where one must feign innocence in the face of bulging Afrikaner biceps. Otherwise I’d be stranded in the Shizuoka Prefecture (possibly forever). Breaking rules is tricky in Japan but during a tense debate the security guard noticed too late that I’d stepped on the escalator. His colleague intercepted the badge wielding reporter at the top but the only place to send me was onto the platform.

The idea for a feature seems a little stupid when checking into ‘Hotel Love’ drenched in dirt and sweat but I weep on seeing the palatial suite. [Note To Accounts Dept: I saved The Irish Times some Yen as these discreet abodes only cost €80 a night as opposed to €120 for your average hotel on booking.com.]

Love hotels are not to be confused with Japan’s glaring prostitution racket. After three weeks city hopping it is still jarring to see young girls block your path after sunset. You think Dublin has deep rooted, unsolvable problems - and it does - then you spread your wings a little and realise they pale in comparison to this idyllically framed society.

Having said that, no way would our infrastructure been ready to host in 2023. We were dreaming.

Japan is safe. “Six bullets fired by the cops last year,” said Kobelco Steelers coach Dave Dillon. Six? “Six [in 2015]. And you see young kids wandering by themselves on the subway?” What’s that all about?

“Safest country on the planet, mate, and I say that as a father of daughters.”

Safe, so long as you avoid Yakuza territory, which tend to be the best nightclub areas.

She finds the two night stay stranger than the fact I am alone.

Yes, Love Hotels originated as a place for married businessmen to have affairs, usually cash transactions, but from my albeit brief experience and research, it’s where young couples come to keep relationships discrete from traditional parents. It’s also where many millions who live in cramped conditions can go to have more expressive sex. Nobody is walking about the place ashamed.

The idea harks back to the Edo period in 17th century Japan when closed attitudes to western culture and technology began to thaw, mainly via interactions with Dutch traders. There’s a word for this social enlightenment: ‘ukiyo’ (the floating world).

Entry via an underground car park feels seedy, and a little worrying, especially when an elderly lady appears from behind a curtain in the fourth floor lobby. She finds the two night stay stranger than the fact I am alone. You can book rooms by the hour.

‘Sumimasen, how do I turn off (love) music in my room and flashing light ball over the bed?’

The control panel is in Japanese. Red flashing dots in ceiling imply that you are being watched. But my ‘aeronautical themed room’ has better facilities than every other hotel on the road. After pizza, jacuzzi and sauna I fall soundly asleep in a giant cockpit.

Rassie Erasmus was right: Conor is a good man but life rarely pays off for the honest soul. The Springboks are the biggest specimens O’Shea has ever seen. RG Snyman and Malcom Marx celebrated the seventh try like they’d won their first trophy at Craven Week . Italy were “ruined” and “destroyed” after both tightheads got injured before both looseheads should have been sent off after dumping Duane Vermeulen on his freakishly large skull.

What can go wrong at this World Cup will go wrong and so much more besides.

Ireland have problems - desperate form and mounting injuries - but peering in on Erasmus’ and Siya Kolisi’s post match press conference you’d swear the ‘Boks are not under a cloud of doping, racial abuse and physical assault. Not a single mention of the internal investigation into Eben Etzebeth. It was an astonishingly patriotic performance by the South African media. Even when we know Schmidt will kick an answer to touch the question still gets asked. Each to their own, I guess.

Karma is kinder tonight; lanyard and badge grants access onto a shuttle bus back to my windowless abode. Young couples ghost through drum and base fueled corridors. Each to their own.

1 Cam Newton broke the mould: Can his flame be rekindled at the Patriots?
2 Tipping Point: DeChambeau’s transformation raises questions, but who will ask them?
3 The Game Changers: Vincent O’Brien, a pioneer who took Irish racing to the world
4 Pete Sampras: The forgotten great with the best serve in the business
5 UK Sport to investigate ‘deeply troubling’ gymnastics abuse allegations
Real news has value SUBSCRIBE