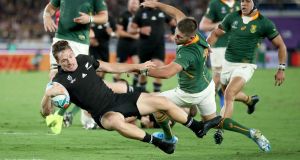 Rumours of the champions impending demise may have proved premature. South Africa’s reinvention and rejuvenation under Rassie Erasmus ensured they arrived in Japan ahead of New Zealand and looking more settled after going toe-to-toe with them over their last three meetings. Whereupon the All Blacks put the Boks back in their box.

From a parochial perspective, the incentive for Ireland to beat Scotland is even greater. The Boks are uber-physical and well organised, but the back-to-back champions remain the most capable side on the planet of soaking up pressure and stealthily striking for, say, 17 points in a five-minute spell. As they did here. They are to be avoided, preferably, for as long as possible.

This was the powerful team being outsmarted and outplayed in the finer skills of the game. For much of the opening quarter the Springboks had looked altogether more sure of what they were doing and were certainly winning the collisions on both sides of the ball.

Aaron Smith was having a far tougher time than Faf de Klerk at the base, with the big Boks scrum, defensive line speed, huge hits and counter-rucking all making life comparatively difficult for the All Blacks scrumhalf.

Leading 3-0 and with a routine Handre Pollard penalty to make it 6-0, the Boks were seemingly in control. Already it seemed, the All Blacks were going to have to absorb plenty of punishment and produce at least two moments of magic to win this one.

But of course, like Ali with rope-a-dope, if there is a team that can soak up the punches and explode off the ropes, it is the All Blacks. And they did exactly that, scoring 17 unanswered points in a five-minute salvo soon after.

The more programmed Boks had their power plays with their battery of human missiles, and often gained yardage through their defensive line speed and array of big hitters as well. But the more inventive All Blacks stood firm and had far more wit, invention, footwork, passing skills and heads-up vision, especially when things became broken or went up a gear or three.

Their employment of Richie Mo’unga and Beauden Barrett as dual playmakers worked a charm, as did accommodating Ardie Savea as a second openside in their backrow. They also outflanked the Boks’ outside-in blitz defence with the simple expedient of having their wingers hug the touchline.

Helpfully for the game and perhaps them, the rain stayed away after all. While most supporters seemed to be neutral, many of the hosts, in addition to wearing their own team’s red and white tops, wore black. That said, the South African national anthem appeared to be a few decibels louder.

They were the first to celebrate some points too, the brilliant Cheslin Kolbe competing for a De Klerk box kick and although George Bridge made a clean take under pressure, he was penalised for holding on when Boks’ loose-head Steven Kitshoff couldn’t be shifted from over the ball. In fairness, he’s a big unit.

From almost halfway and six metres in from the right hand touchline, Pollard duly nailed a huge penalty.

Kolbe followed up with two fabulous takes, and De Klerk’s box kicks were causing the All Blacks problems. Pushed onto the back foot and forced to concede a lineout inside halfway, after Damian de Allende and Eben Etzebeth in turn powered over the gain line, Mo’unga beat Kolbe to the touchdown from Willie le Roux’s grubber.

That was an advantage play after Nepo Laulala had been pinged for offside, but surprisingly Pollard hit the post with a routine penalty.

That was the All Blacks’ cue.

They owed a debt to Seve Reece’s nimble footwork, diving pass and Barrett’s relieving kick to prevent an attacking Boks lineout. Then De Klerk’s wild pass went loose and Mo’unga latched onto it, gathering his own kick before being chased down by Makazole Mapimpi. The winger didn’t release before contesting the ball, and then Siya Kolisi slapped down the pass from the recycle under the posts. Both looked yellow card offences. Astonishingly, not least to a bemused Kieran Read, Jérôme Garcès merely awarded a penalty. Mo’unga drew the sides level before a double whammy.

First Bridge reclaimed a Smith box kick and from a midfield recycle, spotting the Boks were pushing up but short of numbers, Mo’unga kick passed to Sevu Reece on the right touchline. He gathered and accelerated away as if on jet heels from Mapimpi and Smith was both the sharp link with Savea, who powered into the Boks’ 22, and the first to effect the rapid clear-out. Crotty stepped in at the base, and one pass later Barrett spotted an inviting gap between Etzebeth and Frans Malherbe to accelerate though and offload for the supporting Bridge to score.

Within two minutes Pollard failed to gather a high kick and the All Blacks probed right with Savea on the touchline and then left, where Dane Coles freed his hands in a tackle to pop an offload, basketball-style, to Bridge. The winger stepped infield and left Malherbe, Malcolm Marx and Etzebeth for dead, before drawing Le Roux and passing inside for the galloping Scott Barrett to score untouched from the 22 metre line.

Mo’unga converted, but missed a penalty to push them further ahead before the Boks had one final salvo which ended with Pieter-Steph du Toit spilling De Klerk’s pass. There was less of a strut to them trotting off at half-time.

But it soon returned. Kolbe, the Boks’ most quick-footed and quick-witted player, broke clear and turned Mo’unga inside out before the latter hauled him down, and when Barrett retrieved the loose offload, he counter-attacked from behind his own line.

For once the risk backfired. De Klerk picked off an intercept as the All Blacks were set to break clear with numbers. Mark and Etzebeth made hard yards and the All Blacks’ policy of not contesting rucks came unstuck when Du Toit simply ran in untouched with no pillar behind the ruck.

The game had moved on to another level and in another tit-for-tat exchange moments later Duane Vermeulen arced infield and broke clear after before the Boks pounded the All Blacks defence deep inside the 22.

Replacement loosehead Ofa Tu’ungafasi prevented a probable try with his tackle on Lukhanyo Am before Crotty won a turnover under his own posts. Smith countered daringly from the recycle, and soon Reece was scampering up the touchline and linking with Barrett, who nearly latched onto his own deft grubber.

Le Roux’s pressure prevented Bridge from getting a try-scoring pass away to Barrett after another lightening transition off a dominant scrum on the Boks’ put-in. The All Blacks had to settle for Mo’unga’s fine 40 metre penalty wide to the right.

As usual they had already introduced TJ Perenara. After his poor exit kick, conceding a lineout on their own 22, he and his teammates were indebted to Savea winning a turnover penalty. They soon also replaced Mo’unga with Ben Smith, meaning Barrett reverting to outhalf and re-assuming the kicking duties.

The All Blacks were back in charge, if not control, and drew the Boks offside. Barrett had missed a 35 metre penalty to the right inside the last 10 minutes with a seven-point lead in Wellington in July, before the Boks salvaged a draw. At a similar point to the left of the posts, this time he didn’t.

The impudent Kolbe threatened to create a thrilling endgame, dancing through traffic and sprinting clear before behind chased down. Even from another turnover by Savea, less than five minutes from time, Perenara’s first instinct was to launch a counter-offensive from inside their 22.

The only unbeaten pool record in the history of the World Cup remains intact, and that will surely be for at least another four years as well.

Repeat, they are to be avoided for as long as possible.