Rugby World Cup: France scrape over the line against Argentina 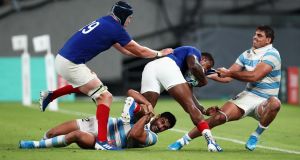 Gael Fickou of France is tackled during the Pool C game between France and Argentina in Tokyo. Photo: Cameron Spencer/Getty Images

France survived by riding their luck as much as Camille Lopez’s 70th minute drop goal separated these old rivals in a calamitous battle for the ages.

It certainly wasn’t discipline that inched them towards a World Cup quarter-final. Or fitness. Nor was it the defensive might that will be needed to eventually win this tournament.

Their overall performance was wrapped in cliché; beautiful, awful and typically French. Jacques Brunel’s charges thrilled then tortured their followers with a first half display that yielded tries from Gael Fickou and the magnificent Toulouse scrumhalf Antoine Dupont, before sheer Argentinean guts fell just short of one of rugby’s greatest ever comebacks.

Fickou should be lauded for a wonderful all round display but the powerful centre almost cost his team a place in the last eight when needlessly making contact with Emiliano Boffelli in a late, late aerial collision (similar to Ronan O’Gara in the second Lions test against South Africa in 2009).

Boffelli’s 50-plus metre penalty attempt had the legs but not the line. So France survive. Nothing more.

Still, expect their belief and spirit to soar.

“We could have done better” said Brunel with a straight face.

Turns out he’s a rugby genius after all!

Of course nobody masterminded this victory. The besieged head coach - is it ever any other way with them? - hardly endorsed Romain Ntamack, his young outhalf, when stating pre-match that Lopez would replace the 20-year-old to ensure a steady hand closed out the game.

In fact, both playmakers were on the pitch come the finish as Lopez ambled into the fray on 65 minutes when Damian Penaud was injured in another mid-air clash with Boffelli.

Here’s how France exploded and wilted over the course of an unforgettable 80 minutes.

The game sparked to life on 17 minutes when Fickou finished a try to live with anything France has produced in their golden days. Read the names and swoon as Maxime Médard flung a perfectly weighted pass wide for Penaud to sprint 30 metres up the right flank. Dupont kept up the rapid pace, knowing that the giant Fijian Virmi Vakatawa was looming in space. When scrambling Argentines surrounded Vakatawa he popped the ball for Fickou who, having lingered wide left after launching the attack, danced against the tide.

Ntamack, having shrugged off some early jitters, smacked over the conversion as La Marseillaise boomed and bounced all over the Ajinomoto stadium.

The French were rampant now. Fickou popped up wide right, stepping into a gang of blue and white bodies but another quick recycle allowed Dupont, the little general, dive over after trailing Penaud. Ntamack struck another fine conversion to make it 14-3.

There was a momentary lull so referee Angus Gardner could lecture misbehaving props Juan Figallo and Jefferson Poirot, imploring that they get “a touch closer so you can get a bind.”

Poirot, the super energetic French loosehead, was keen for this to happen while Figallo, despite five years at Saracens, appeared to have little understanding of the English language. He did have two scrum penalties in his back pocket.

This unsteady platform was denying France the possession needed to rout an increasingly desperate looking Pumas.

The props nodded and France survived an Argentine onslaught before the break, thanks to the Rabah Slimani winning a scrum penalty, with two more Ntamack strikes leaving them 20-3 clear.

At that moment you would be forgiven for lumping a wad of Yen on France to win the World Cup. Just like they seemed on course for the Grand Slam 40 minutes into their opening Six Nations match against Wales.

They are masters of illusion, and disillusion.

What’s glaringly obvious, and even visible during the warm-up, is the desperately needed modern coaching methods of Fabien Galthié have taken hold. But they needed to piece together an 80 minute display to make you trust them.

In this they failed, once again. Argentina, to their enormous credit, refused to fold. Not two minutes into the second half Guido Petti Pagadizaval was heaved over from a lineout drive.

Brunel reacted to ongoing scrum issues by sending Camille Chat and the soon to be great Demba Bamba (the coming French generation really should conquer the world) into the fray.

Now we would see if France had added defensive mettle in their long summer together. They have not. Certainly not against the driving maul as Julian Montoya came off the bench to claim the second Argentina try but Nicholas Snachez missed the conversion to leave them trailing by five, 20-15, with 54 minutes on the clock.

On the hour mark Urdapilleta struck a penalty to make it 20-18.

Brunel, despite his pre game warning, introduced Thomas Ramos at fullback for Medard while Louis Picamoles was the next major dice roll before Lopez was forced to replace Penaud.

Gardner stalled to re-watch the aerial contest between Penaud and Emiliano Boffelli.

“I’m happy with the challenge.”

It was an enormous call because Urdapilleta was lining up his second penalty, which he nailed, to inch Argentina a point clear. Then Lopez had his glorious moment and France clung on for dear life.

Afterwards Ledesma was highly critical of Gardner, citing two key decisions that he believes cost the Pumas the game and perhaps a place in the last eight.

“I don’t know the penalty count but the ref told them several times that the next one would be a yellow card,” said Ledesma. “And the last play the French tacklers didn’t roll away and they jackalled the ball.

That would have been a penalty in front of the posts from 30 metres.

“I’m not forgetting what we didn’t do in the first half but these are clear game changing decisions.”

France captain Guilhem Guirado also put some verbal studs into how Gardner interpreted the scrum. No referee would have escaped this match unscathed. Gardner was as clear and decisive as any man could be when dropped into the middle of such combat. .

Ledesma and Argentina go bitterly into the Tokyo night with a now monumental task against England on October 5th.