Murphy’s Law could prove the undoing of Joe Schmidt's Ireland

With injury piling up on injury, Ireland are getting perilously close to their trauma limit 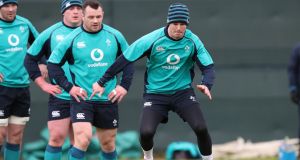 What lies beneath will soon be visible. See enforced promotions of Quinn Roux and John Cooney, and the Irish openside flanker merry-go-round.

England’s successful methods of removing Keith Earls and CJ Stander last Saturday came with the promise of more pain and suffering in 2019.

For all Jason Cowman’s skilled guidance as strength and conditioning coach, the Kitman Labs input and the ability of Nick Winkelman – the IRFU-invented “head of athletic performance and science” – to transport his expertise of elite American sports to this pint-sized rugby island, nobody among the “Team of Us” can fully legislate for what is happening.

“They have two weeks off during the Six Nations but they’re goosed,” said Cowman earlier this season. “They’ve had two Test matches in a row and they’re absolutely shot in that third week.”

Hence, strong resistance to English clubs trying to steal back one of two free weekends.

“That’s why around Christmas we give them a period off, we give them a week off at the end of November and at the end of the Six Nations, but to be honest we’re still chasing rest,” Cowman continued. “They still don’t get the same degree of rest as the [non-international players in the Irish system] while being expected to perform in bigger games, more intensity and higher expectations.”

We’ll utilise the 31 players who will travel, but it would be great to have 34. It’s a massive toll

The Six Nations is a doddle compared to the World Cup schedule: six days between Scotland and Japan games, a five-day turnaround before Russia, nine days to Samoa, a week until the quarter-final – six if Ireland finish runners-up in Pool A – and six days’ rest to the semi, with another six/seven before the final.

“We’ll utilise the 31 players who will travel, but it would be great to have 34. It’s a massive toll. Out of respect for the effort, let’s manage our expectations around how often we expect them to do it.

“If we want to train 15 on 15 you need 30 players, but you’re always going to have three or four players who are a bit banged up, have a bit of a niggle, who can’t train because they wouldn’t be right from the weekend.”

Official numbers in Carton House this week almost touch 40, with extra bodies supplied from provincial academy ranks. Joe Schmidt is lauded for exposing the next generation to his senior panel, but Winkelman also tracks them scientifically.

“Nick has come in and done a great job streamlining the provinces, so by the time a player is 23 and winning his first international cap, they will have a passport of seven, eight years of data,” Kevin McLaughlin of Kitman Labs told The Irish Times last year. “That allows them make the best possible decisions for the individual’s optimal training programme.”

Winkelman was asked in 2017 if the players are less likely to break down than previous times.

“From where I sit that would be difficult to answer right now,” he replied. “I have been very happy to see the way we are training our players in the weights room and on the field.”

Training and science cannot reduce the carnage inflicted by Vunipolas.

“Murphy’s Law,” a ghostly Schmidt told Sineád Kissane last Saturday night, “that you get a couple of injuries in one position and you get another injury in that same position.”

Devin Toner missed only six games under the current regime, but the 32-year-old’s first serious damage has arrived. With no clear timeline on Tadhg Beirne or Iain Henderson’s return, Roux gets a chance, but the South African’s selection highlights the importance of fitness in 2019.

“We don’t have the same personalities they have,” said Schmidt of England. “They’ve got the firepower.”

Schmidt was at pains to explain Ireland’s need to use Robbie Henshaw at fullback – before Japan – but that plan may be altered by Garry Ringrose’s latest wound. Constant midfield injuries are mirrored at openside, with Dan Leavy unable to build on some phenomenal performances in 2018.

This season only the Irish tightheads have avoided sustained periods on the sideline.

Hooker stocks appear perilously low. For whatever reason, Schmidt refused to fully back Seán Cronin in Australia last summer, with Niall Scannell starting two tests, and two more in November against Italy and USA. Rory Best turns 37 in August. The captaincy will hardly be reversed between now and the World Cup, but a 35-year-old Paul O’Connell’s hamstring exploded against France at the 2015 tournament, leading to the only truly disastrous week in the Schmidt era. It doubled as the most important week, when Ireland’s durability was badly exposed.

Scrumhalf has been sternly tested of late. Conor Murray’s neck injury – and he doesn’t look right yet – gifted starts for Kieran Marmion and Luke McGrath. Both are now crocked, so Cooney gets a deserved opportunity, but that’s the trauma limit any position can sustain in Ireland or any other rugby nation.

When push comes to shoving past the invisible line that Irish teams led by Keith Wood, Brian O’Driscoll and O’Connell all failed to cross, it was bigger, stronger, faster French, Argentinean and Welsh opposition that denied entry to the elite table of world rugby. England’s destruction of Ireland at the Aviva all but guaranteed South Africa or New Zealand will cause lasting damage on October 19th or 20th.

“We failed to stop them cold,” wrote Gordon D’Arcy. “There wasn’t a single turnover on their ball.

“Irish players will never be truly comparable to All Blacks, Springboks or the English. That’s why players like CJ Stander and Bundee Aki were recruited.”

Roux can be added to that list of raw Antipodean/African power that abruptly ends with James Lowe qualifying via residency in 2020, as the five-year wait is less enticing to the IRFU or middle-tier southern hemisphere talent.

“We are a smaller breed,” D’Arcy added. “We will never be the giants of rugby. Nor should we ever want to be.”

As Schmidt always feared, a lack of durability might still prove Ireland’s undoing. The best-laid schemes of mice and men go often askew.