Gerbrandt Grobler: Munster was ‘a small place and a lot of people talk’ 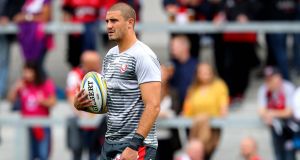 If Gerbrandt Grobler needed a reminder that he can never fully escape his doping past, it came within days of his arrival at Gloucester. It may have been coincidence but he was the first player drug-tested in pre-season following his summer move from Munster, brought about by the storm that brewed in Ireland over his two-year doping suspension for taking a banned steroid.

Grobler says he had held discussions over extending his stay in Ireland and going on to represent the Six Nations champions, claiming he had been offered a three-year contract until the criticism received by the Irish Rugby Football Union for having a convicted doper on its payroll – he was banned until October 2016 – reached tipping point.

In effect the 26-year-old South African lock feels as if he was hounded out. “There was actually a three-year contract on the table,” he says. “There was a bit of debate whether or not I was going to stay and then, when the news hit, it was like: ‘He is going to leave; he should leave.’ I was contracted with the IRFU and there were a few conversations about signing a three-year deal. But obviously that was shot down very quickly after the media fiasco.

“I didn’t want to leave at that stage but I learned a lot and it was like a year was enough for me of being questioned, even if it was four years ago. Nobody likes their past being thrown in their face the whole time and you can only take it for so long.”

Whether England would consider him as and when he becomes eligible remains to be seen but Grobler maintains an ambition to play at the highest level. “Obviously you wouldn’t turn it down [if Eddie Jones called]. I don’t think anyone would. You’ve got to have belief in yourself, otherwise why are you playing this game? You’ve got to have ambitions and goals but I’ll keep them to myself. There is always hope.”

Grobler was banned for taking the steroid drostanolone while at the Stormers in South Africa. The positive test was announced in early 2015, backdated to October 2014 and, having given serious consideration to walking away from rugby, he resumed his career with Racing 92 two years later.

Twelve months on he joined Munster but suffered a broken ankle before his competitive debut. That eventually came in February, by which stage the IRFU was under fire. “I really enjoyed my time there. It was just unfortunately a small place and a lot of people talk.

“If I can sum it up, it was a slow news week. When the news broke I was just coming back from rehab and it fuelled my fire more. And then I reached the stage where I didn’t really care what people think and that’s the biggest freedom you can have – to play without worrying what someone thinks about you and says about you.”

It took Grobler a while to reach that stage, however. He says that at one point he was on the verge of depression and he was in contact with Johan Ackermann, the Gloucester head coach who, as a 26-year-old Springbok in 1997 struggling with injuries, took a banned substance, was caught and suspended. Grobler adds: “I would almost say I was a bit depressed but the sun does shine again. You can use all these things to say there was a silver lining. You move on and I have nothing bad to say [ABOUT MUNSTER].”

Grobler, one senses, cannot quite appreciate why the negative headlines at Munster – who are funded by the IRFU whereas Gloucester are privately owned – grew so fierce. But at Kingsholm, where there is a burgeoning South African contingent, he feels he has at least turned the page and makes his debut on Saturday in a pre-season friendly away to Ulster, perhaps with a point to prove against Irish opposition.

“It has been a while since it was a fresh start but I wanted to be part of something that is fresh,” says Grobler, speaking this week before the club’s pre-season trip to Jersey and Danny Cipriani’s notorious night out. “A new generation of club that is building something good with a good potential. I have always wanted to be part of a team like that and that is one of the main reasons.”

Grobler has admitted in the past that he took the banned substance because of a series of injury problems and fear of losing his contract with the Stormers. He hints there may be more to the story but is candid about the impact it had on his life. “There are a lot of stories going around and that’s fine, you can believe whatever you want to believe. It’s something I don’t want to describe in too much depth until I’ve finished with rugby because there are a few bridges that might be burned.

“The first year was tough. I was careless – you lose a lot of friends, you lose a car, you lose a house, all those things you take for granted, you lose it all within a week. It made me a better person and I wouldn’t change it for anything because of what I’ve learned and the people I’ve filtered out of my life – the so-called mates – and then the supporters who will be there through thick and thin.

“It’s now all in the past for me. I’m really comfortable with people bringing up my past because it doesn’t faze me, I’ve moved on from it. It’s not going to hold me down.”

1 Dave Hannigan: Trump gets the clubs back out as death toll keeps rising
2 Philip Browne admits funding model for Irish rugby is not sustainable
3 Premier League to restart on June 17th - BBC reports
4 Dr Bob Rotella: ‘If you focus only on the target you’ll play darn good golf’
5 October dates being considered for Irish Open at Mount Juliet
Real news has value SUBSCRIBE