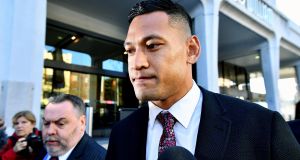 Israel Folau has formally launched Federal court proceedings against Rugby Australia and the New South Wales Waratahs over his dismissal for a code of conduct breach, the former Wallabies fullback said on Thursday.

Folau’s four-year contract was torn up in May after he posted a meme on social media that said hell awaited ‘drunks, homosexuals, adulterers’ and other groups.

“Unfortunately, our conciliation before the Fair Work Commission did not resolve the matters between us and I have been left with no choice but to commence court action,” the statement read.

Folau, a fundamentalist Christian, and his supporters have painted the issue as one of freedom of speech and the case could have ramifications for employee rights.

A Rugby Australia tribunal found Folau had made a “high-level breach” of its code of conduct, which demands players treat “everyone equally, fairly and with dignity”.

Folau, who was one of the Wallabies’ few world class players, had been expected to play a key role in the team’s World Cup campaign starting in Japan next month.

He has hired a high-power legal team and raised a $2 million (€1.24m) war-chest from supporters via a Christian lobby group to fund the proceedings.

“I’ve been blessed to have the support from tens of thousands of Australians throughout my journey and I want to say thank you to everyone who has offered their prayers and their support,” Folau said in a video posted on Youtube.

“It has meant so much to (wife) Maria and me over the last few months and gives us strength for the road ahead.”

In June, Folau and Rugby Australia entered mediation at a Fair Work Commission hearing, the first step in an unfair dismissal case, but there was no resolution after a nearly four-hour meeting.

The 30-year-old is seeking €6m in compensation for foregone sponsorship and future contract income from RA and his former Super Rugby side, the Waratahs.