If Ireland were to win it all, each of the 31 squad members would get a €100k bonus 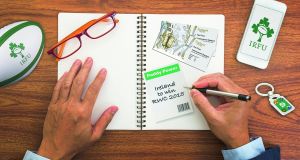 Should New Zealand retain the Rugby World Cup each player would be due a NZD$150,000 (€87,000) bonus. Many unions competing in the World Cup carry insurance against the prospect of paying a multi-million euro win bonus to a tournament-winning squad. The IRFU is no exception.

Each year the IRFU forecasts a certain level of performance for the national team and provinces in order to budget for potential win bonuses being due to players. The World Cup is different. It’s a separate deal. No agents are involved. Each players’ association, where there is one, negotiates a contract with their union that covering the fees payable to their players for the competition. In Ireland’s case this negotiation was carried out by IRUPA.

Whether Tadhg Furlong or Jamie Heaslip the contract is the same. The IRFU pays each Ireland player a basic fee for making the Rugby World Cup 2015 squad (between €30,000 and €40,000). Irish success would then bring bonus payments, understood to be heavily weighted towards reaching marks that no Ireland team has reached before. Should an injured player have to be replaced they would split monies due with their replacement on a pro-rata basis.

If Ireland were to win it all, the Irish Times understands that the total bonus payable on top of that initial squad fee would amount to over €100,000 per man. That would be a €3.1m bill for the IRFU, a significant financial risk that the union manages via Paddy Power.

While the thought of the IRFU chief executive Philip Browne wandering from Lansdowne Road to a Baggot Street bookies with a briefcase full of cash might be an intriguing one, the process is a little more nuanced.

David Lyons is associate director of sports risk management at Paddy Power PLC, who set up Airton Risk in order to “mitigate the financial risk related to the outcome of sporting events,” said Lyons.

The mechanism is straightforward. The odds of a specific event’s occurrence are calculated with a fee charged to the customer based on those odds and the size of the loss they wish to insure themselves against. The IRFU confirmed they still use the facility, as they have for previous World Cups.

Airton clients, including sports organisations, sponsors or agents, can sign a contract directly with the company or with Allianz Insurance who then transfer the cover to Airton. The material difference between the two is that with the latter arrangement a customer signs a contract with an insurance company rather than directly with a bookmaker. While this extra step is necessary for compliance with some sports’ guidelines, some customers simply prefer to have an insurance company’s name on the agreement.

The bottom line remains the same, however. It boils down to betting with a bookmaker, something World Rugby’s regulations prohibit anybody connected with a team from doing. When it comes to hedging, however, World Rugby confirmed that it is acceptable for a club or union to put in place such an arrangement for this purpose.

Are there perception difficulties with Airton being attached to Paddy Power?

“There can be” said Lyons. “Some corporates aren’t overly happy; there’s a certain stigma associated with betting, I think. But in the bare bones of it this is a financial hedging product, nothing else. There’s a quintessential difference, in that betting is introducing a risk into your life; hedging is taking an existing risk off the table. And that’s what this business is set up to do. So once you can get by that point we’re normally fine.”

Like each other Tier One nation, the IRFU will receive over €10 million (£7.5m) from World Rugby for taking part in the World Cup. This flat fee, coming on top of the £150,000 paid to every participating team, is partly profit sharing and partly compensation for the absence of summer and autumn tours this year due to the World Cup. It’s an increase of £3m per side over the 2011 model, with the four Rugby Championship sides sharing another £10m to account for a shortened Rugby Championship.

Tier Two nations don’t get that; rather there has been approximately £50m invested in funding across high performance, sevens and other items between 2012 and 2015.

The IRFU might need every cent of that payment if 31 Irish players were to add “World Cup Winner” to their CVs on the morning of November 1st.

It would have significant value, both on and off the field. For players of the right age and profile the moneymen behind English and French clubs would present a wide, cash-laden embrace.

But enough of all that. Feet must remain on the ground, with beating France the next priority. Trying to keep players after an Irish World Cup win? What a very nice problem for the IRFU that would be.