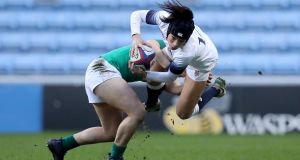 England’s Kelly Smith is tackled by Katie Fitzhenry of Ireland during the Women’s Six Nations match at the Ricoh Arena in Coventry. Photograph: Tommy Dickson/Inpho

Sometimes there’s no shame in defeat. Even if every pass had stuck and Ireland reduced their error count by three quarters it probably wouldn’t have sufficed against an England side that were too polished, too powerful and quite simply too good for the visitors in Coventry.

Ireland produced their best defensive performance of the tournament but it won’t provide an immediate salve for battered and bruised bodies. Irish head coach Adam Griggs must await a review to see if his tenure as coach will continue. He wants to stay on.

“Looking at where we started and where we have come to, I’m quite proud of the ladies and how they have grown. They have got better and better and as a coach that’s all you ask. I’d love to build on what we have done so far. Hopefully we can sort something out and if it’s agreed then great.”

One thing that doesn’t require coaching is attitude and Ireland’s aggression in the tackle, particularly Katie Fitzhenry, Claire Molloy and Leah Lyons, and the carrying of Ciara Griffin and Lindsay Peat in particular was hugely impressive. Ireland Sevens players made a handsome contribution.

What Ireland lacked in executing the basics accurately at times – it’s been a dog-eared theme throughout the tournament – they compensated for in sheer bravery, epitomised by Niamh Briggs, who put body and soul into two thundering collisions.

Twice she came off second best, on the first occasion smashed in a double tackle as she went full pelt for the English line and on the second occasion throwing her body in front of the runaway English tighthead prop Sarah Bern. Unfortunately for all their tenacity, apart from a six-minute spell in the first half, Ireland were ruthlessly subdued by an excellent England team.

The first half could be summed up in one facet of the game; Ireland had a lineout that malfunctioned, for England it was a starter play for the impressively constructed rolling maul that yielded two tries in a three-minute period of play. The English eight eviscerated the Irish scrum for good measure.

There was another try for English left wing Danielle Waterman, a record 47th for her country as the home side eased into a 19-6 interval lead. Nicole Cronin, an irrepressible and feisty presence at scrumhalf, had Ireland’s best chance of the half, snapping up a loose ball and setting off for the English line but she was brilliantly cut down by Kelly Smith, eight yards short of her goal.

England disappeared into the distance on the scoreboard with tries from Ellie Kildunne and Amber Reed, Molloy’s riposte a just reward for an outstanding individual display from the Irish flanker and perhaps for a team who gave everything physically but were simply overmatched in technique and skill.