England to put faith in forward power against Wales

Gerry Thornley and Gavin Cummiskey look ahead to the Six Nations opener as Wales welcome England to the Millennium Stadium. 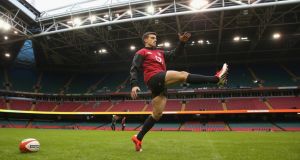 September 26th. In the event of the neighbours not making the knockout stages of their own World Cup, there will be dancing in the streets from Pontypridd to Prestatyn.

That is not, however, the way things feel right now. A bigger picture exists but there is no such thing as an inconsequential Six Nations game between Wales and England in Cardiff. Somewhere deep in both countries’ DNA is a horror of losing to the other at rugby union.

It is inaccurate, then, to suggest England have headed down the M4 for a casual World Cup warm-up. Having driven home two years ago with their chariot in pieces, they are clearly forewarned, but dwelling on past slayings will not help either side under the Millennium Stadium lights. As the respective coaches well know, what happened before is not necessarily what will happen now.

Having seen how far an emphasis on forward power took his side against Australia last autumn, Stuart Lancaster certainly has faith in his English side, regardless of the bookmakers’ scepticism. “The odds are irrelevant to me,” insisted Lancaster, who has claimed victory in 80 per cent of his Six Nations games as head coach. “We respect their British Lions but, equally, we have confidence and belief we can do the job. If we don’t believe that, we’ll have no chance.”

Lancaster remains keen to develop a more potent backline but if the English game plan is tighter and more territory-based, it will be no surprise. It is not hard to see why a touch more pragmatism might appeal at a venue where they have lost on four of their past five championship visits.

Haskell and his fellow backrows suspect the breakdown will be even more of a key area than normal, Sam Warburton and Justin Tipuric having excelled in the 30-3 blow-out two years ago. “We’re all aware of the threat Warburton poses and the ability of some of their players to get over the ball,” said Haskell. “That’s going to be a very hot area for us. The team that gets the upper hand there will go well.”

Much the same message has been relayed by Wales’s coaches, who seek the same intensity that beat South Africa and ruffled New Zealand rather than a repeat of last year’s below-par Twickenham effort. “We’ve spoken about last year,” said Shaun Edwards, Wales’s defence coach. “That’s the freshest thing in our minds, not the 30-3 victory. I feel we are more focused this year. Last time we were off the pace.”

The home team will also be eyeing the 10-12 channel and wondering if Jamie Roberts can reprise his stand-out display for Racing Metro against Luther Burrell’s Northampton last month. This is Burrell’s moment to prove that, defensively, he is as solid as he can be forceful with ball in hand. Perhaps even more crucially, it is time for England to stop counting their injuries. Ultimately, the mark of a successful team is an ability to react swiftly and effectively when a spanner is thrust into the works. Injuries permitting, 11 of this supposedly incomplete English XV may yet start against the Welsh at the World Cup, while this is currently Wales’s first-choice selection. Establishing a winning habit is more pressing than totting up absentees.

In the end, though, it comes down to a question of priorities: the short-sighted parochial sweetness of Anglo-Welsh victory or that bigger picture? Here’s a certainty: the losing coach will simply shrug his shoulders and say: “See you in September.” Guardian Service