Japan 19 Ireland 12: How the Ireland team rated in Shizuoka 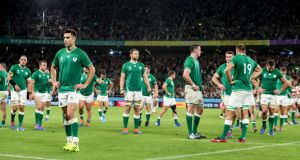 Ireland broken by Japan. Stunned on 68 minutes, and subsequently failing the HIA, it forced Stockdale to fullback, Luke McGrath onto the left wing and Jordan Larmour, a disaster waiting to happen, at centre. Chaos reigned. Rating: 6

The winger marauded across the Ecopa grass like his flanker father Ger used to on the killing fields of Tom Clifford Park but then, like everyone in a green jersey, he visibly, almost tragically, faded in the sweltering conditions. Rating: 5

Awesome performance to rank alongside anything his famed predecessor produced in the 13 jersey across four World Cups. Whip smart and dangerous, while he could still breath, finishing his try with swivelling magnificence. Rating: 8

Forced off following a heavy belt on 59 minutes, Ireland could not survive his absence. Battered over a viciously contested gainline for crucial yardage and produced a herculean 15 tackles. Panic now. Ireland have run out of centres. Rating: 7

Hardly got a look in. Couldn’t get a look in. The fear now is this World Cup will pass him by before global superstar status can be confirmed. Rating: 4

Impressive start overshadowed by inability to be anything more than a defensive speed bump. Line kicked, prodded and punt passed effectively but once his restart rolled dead the momentum dramatically swung behind Japan. Rating: 5

Brainless offload went forward on 67 minutes to suck the life out of the revival. Needed treatment on 46 minutes as the Irish team began to fracture but had to keep going as Luke McGrath was needed on the wing. Rating: 4

Both Irish props were damaged and removed on 45 minutes. Healy never returned. Heavy confrontations being the order of this tournament, he was menacing in early exchanges, but Dave Kilcoyne’s arrival could signal a changing of the guard. There must now be sacrifices. Rating: 4

Hauled off on 60 minutes. Overthrew one lineout to put Carty in the firing line and made a hames of 50th-minute throw to Henderson with Ireland deep in Japan’s 22; that proved unbelievably costly to this World Cup campaign. Rating: 3

Excellent, particularly in loose play with those bullocking angled runs, but it was hardly a surprise to see him leave the pitch. Took awful punishment. Returned after treatment but he was flogged. Rating: 5

Needed to be the alpha male but fell off a cliff in the second half. Must share responsibility with Rory Best’s lineout failures. This display puts all the decisions – not bringing Devin Toner and not picking Jean Kleyn – into question. Rating: 3

Isolated, the killer turnover on 65 minutes by Kazuki Himeno was more a reflection on the jaded Irish pack as it was on this leader in waiting. Needs better lieutenants for the long road ahead. Rating: 7

Correctly replaced by Rhys Ruddock with the game in the balance. O’Mahony has proved the difference in so many Munster wars and his stunning display against the All Blacks will live forever but he could not influence the game at this vital moment in Irish rugby history. Rating: 3

As penetrative a first half as he was anonymous in the second. That’s the difference between having him or Dan Leavy in the seven jersey. Schmidt said it last week, and he is the epitome of this “light heavyweight or middleweight” Irish pack. Honesty was not enough. Rating: 3

As dominant a first half as he was anonymous in the second. Jack Conan’s removal from the World Cup is a crushing blow as the plan had been to drop O’Mahony and put Stander at blindside. He’s all they have left now. Rating: 4

Jordan Larmour’s intercept can never be reversed. Neither can Joey Carbery’s touch finder to secure a paltry bonus point – it was acceptance of Japan’s total dominance. The bench needed to save Ireland. Ruddock and Tadhg Beirne showed well but lacked the necessary power to halt an overwhelming Japan surge. Rating: 1

Ireland pay an enormous price for not selecting, or not being able – we don’t know with certainty – Johnny Sexton. The masterplan is on the precipice of failure after the coach’s worst nightmare became reality. He knew the only way to escape the Ecopa in one piece was to build a strong lead before half-time. Silence the crowd. Reverse the flow of energy. The players threatened to do this but all Schmidt’s squad building means nothing as this dark night in Shizuoka gets shelved one rung below Lens in 1999. Rating: 4