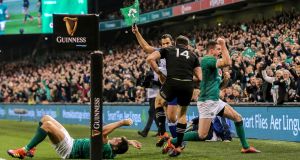 Jonathan Sexton celebrates as New Zealand’s Ben Smith is forced into touch late on at the Aviva. Photograph: Gary Carr/Inpoh

So much for having to score at least four tries to beat the New Zealand. In beating the back-to-back world champions for a second time in three meetings, Ireland showed there’s more than one way to skin the All Blacks.

Having outscored them by five tries to four in Chicago, they did so by one try to nil here. The last time the All Blacks had been kept tryless was when the Lions won the second Test in Wellington by 24-21.

The common denominator, of course, was the same defence coach, Andy Farrell, as well as Johnny Sexton (11 tackles here) and Tadhg Furlong, along with a couple of replacements in Wellington, CJ Stander and Jack McGrath.

This was an even better defensive effort.

Whereas that was a sodden night in windy Wellington, this was a perfect night for rugby. Whereas the Lions played against 14 men for 55 minutes then, they faced the full 15 for the full 80 here (although the All Blacks were fortunate on three occasions not to receive a yellow card in the first half, even if the inspirational Rob Kearney was perhaps also lucky when unintentionally taking out Reiko Ioane in the air).

As well as having to make more tackles, 164 here compared to 111 in the second Lions Test, this was also a much more disciplined effort – Ireland winning the penalty count 11-5 here, in contrast to the potentially ruinous 13-8 penalty count against the Lions.

Whereas three Lions reached double figures for their tackle counts, here eight Irish players did so, led inevitably by James Ryan (who also made 17 carries) with 20, followed by Josh van der Flier on 17 in a mountainous effort by the back-row alone, and even Luke McGrath chipped in with 10 in his 20 minutes off the bench.

And then there was Peter O’Mahony, a key leader throughout the week and again from the pre-match huddle here. His performances are more than a statistic. As he was interviewed on-pitch in recognition of his man-of-the-match award, an accompanying table of stats noted seven tackles, two turnovers won, four carries.

But, as well as the quality of his running and handling, and his lineout athleticism, it’s the timing and enormity of his contributions. The two turnovers were at key moments, lifting sieges by the All Blacks. And then there was his turn and goalkeeper-like save to deny Ben Smith a try from Beaduen Barrett’s deft grubber.

The first of his turnovers also followed Kieran Read’s failure to gather his own charge down of Jacob Stockdale’s chip, with Jack Goodhue on his side and a try abegging.

It also led to the lineout, which he gathered under pressure, from which Johnny Sexton and the decoy runners lured the All Blacks and specifically fullback Damien McKenzie into midfield – come into the parlour said the spider to the fly – before he worked the switch back to the blindside with Bundee Aki to hit Stockdale.

This was another Schmdit strike move, dating back to his Leinster days, and dusted down for the occasion. Ireland having identified the way the All Blacks fill in the middle of the pitch to cover any chips over the top, Sexton had also worked a switch back with the outstanding Garry Ringrose in the first half.

“I mostly steal them from other people,” quipped Schmidt, “because it’s hard to get patents on moves.”

Hansen described it as “a beauty and Ireland really nailed it”.

“They never get a mention but they do a phenomenal job in pinpointing weaknesses and trying to make sure that we maximise strengths when we go out there.”

But at its heart, this was another Schmidt coup and, ala Chicago, masterminded from weeks back.

If O’Mahony tends to seize the moment, the same is even more eye-catchingly true of Stockdale. Even when his kick found the cleverly created space in behind the black defensive line, his desire, skill and a favourable bounce enabled him to gather ahead of Aaaron Smith and take his and McKenzie’s tackles to score. Akin to his try in Twickenham, this was arguably his best of 12 finishes in 14 Tests.

“They’re fitter, so whoever is doing their conditioning work needs a pat on the back,” he said on Sunday morning.

“Their defence is great. Both teams last night defended for long periods really, really well, so Andy is a great defence coach. Their scrum was good, it took us a while to get on top of that.

“So everybody in the team is doing their bit and Joe is obviously leading it very well. They’ve become a team that believes in themselves and are priding themselves on how they’re playing.”

As for the game, Hansen said: “I haven’t had another look at it yet but I’ve been thinking about it a lot. I think two good rugby teams played each other and one team took its opportunities. They had two opportunities, they took the one. We had four and took none.”

Schmidt had, as such, largely concurred the night before.

The intensity was unrelenting from first to last, and if ever a game justified a boxing analogy this was it, each side pinning the other against the ropes with a barrage of recycling, hard running and probing.

For a game that only had one try, an extraordinary amount of time seemed to be spent in the respective 22s, and the All Blacks defended as if their lives depended on it as well. On an admittedly mild November night in Dublin, it was instructive to see so many players going down with cramp.

“It was a battle of wills, wasn’t it?” ventured Hansen yesterday.

“That’s why I said before I thought both teams defended magnificently. There was a period just after half-time, Stockdale had already scored and they chucked the kitchen sink at us, and we had to defend and defend and we did so really well.”

1 Trump in the rough over playing golf and US Covid-19 fatalities
2 Awarding of 2023 Rugby World Cup to France part of Laporte investigation
3 Suarez’ Italian language exam rigged according to prosecutors
4 What next for green jersey hero Sam Bennett after toughest of Tours?
5 Gerry Thornley: Talk of Anglo-French hegemony is over the top
Real news has value SUBSCRIBE