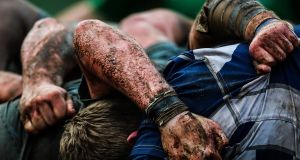 Action from the Galwegians versus Dungannon Division 2B clash at Crowley Park. Difficult playing conditions prevailed nationwide over the weekend. Photograph: James Crombie/Inpho

It has been a fortnight to remember for fullback Heuston who impressed in the Ireland Club XV’s 2-0 series win over Scotland, while he was also involved in the Ireland Police team’s 52-31 victory over their Welsh counterparts on Wednesday.

Robbie Smyth and Munster’s Alex Wootton swapped tries on Garryowen’s all-weather pitch, before the Light Blues worked ’Nure through 16 phases late on and Heuston squeezed a 15-metre drop goal over to keep the hosts well-positioned in second place.

Unbeaten leaders Cork Constitution made it a dozen straight Division 1A wins, triumphing 16-5 at bottom side Ballynahinch thanks to Brian Hayes’s first-half try and Gerry Hurley’s four successful kicks.

Fresh from captaining the Ireland Club team to Dalriada Cup success, Alan Kennedy’s 19th-minute try drove Young Munster to a 21-9 victory at Dublin University. He also made the break in the lead up to his second-row partner Sean Rigney’s score.

UCD edged out UCC 15-12 in a fiercely-contested college derby at Belfield, with Leinster backs Tommy O’Brien and Adam Byrne contributing a try each.

Meanwhile, Munster youngsters Jake Flannery and Craig Casey played their part in Shannon’s rousing 17-10 win at Division 1B rivals Old Wesley. The Limerick men are up to third in the table following a late scrummaging surge that earned them an 81st-minute penalty try.

Fullback Sam Burns bagged two tries as table-topping Highfield prevailed 15-10 at City of Armagh, while mid-table Malone got back to winning ways with Peter Cooper and James McAllister touching down in a 12-0 triumph over Navan.

Promising Ireland Under-20 prop Ryan McMahon got amongst the tries as Old Belvedere avenged an earlier defeat to Banbridge, holding firm to take a 17-14 verdict at Ollie Campbell Park.