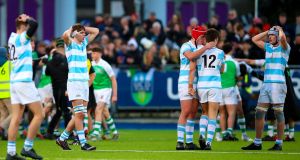 Hero status was bestowed on this special Gonzaga crew as they humbled Blackrock for the first time in the school’s history in the Leinster Senior Cup at Energia Park on Sunday.

It looked the least likely outcome as Blackrock rumbled forward in the first half, their backrow of James Culhane, Matthew Wood and Aaron Rowan scattering bodies in attack and defence.

They were good value for the 13 points returned from pushing the pressure points in Gonzaga’s defence, Tom Gavigan slotting penalties in the third and 12th minutes - either side of another that came back off the left upright.

When Gonzaga’s resistance was punctured for seven points, it had all the hallmark of a killer blow.

It was a thing of beauty too, the Blackrock maul, previously driven for 20 metres, was used as a decoy, centre Sam Small sending wing Tom Henderson home for Gavigan’s extra to make it 13-0 on the half-hour.

Harry Colbert’s three-point reply didn’t look all that significant, especially when Gavigan closed the half with his third for 16-3 at the interval.

The complexion of the contest changed when Gonzaga wing Simon Wilson took off down the left and the same man was on hand to claim Colbert’s crossfield kick for a superb try, converted by Colbert in the 39th minute to make it a one-score game.

There was a frantic period of play in which neither school could establish domination, Blackrock hooker Charlie O’Carroll galloping up the touchline, Harry Colbert called back for a knock-down when countering from inside his 22.

The longer it went on the better for Gonzaga as the game evened-up as a contest, the tension leading to mistakes on both sides.

Ben Brownlee’s recovery of Gavigan’s chip was key to their go-forward, wing John Francis Campbell seeing and taking the gap for Blackrock’s second try in the 59th minute.

It was at this stage that flanker Arthur Henry and Wilson came to the fore, driving Gonzaga on when all seemed lost.

Brownlee came to the rescue twice, stripping the ball in contact and snuffing out another dangerous attack with a turnover.

With time running out, Gonzaga were jet-propelled in attack, Noah Maguire nearly getting in before wing Hugh Lynn dived over on the right.

The crowd and Gonzaga went into overdrive, Wilson picking Colbert’s pass up off his bootlaces for his second try, to make it a one-point game.

It was left to Colbert to be calm enough to turn defeat into victory with one swing of his boot and he was up to the job.