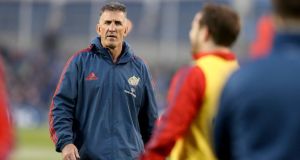 Munster coach Rob Penney: “The momentum can shift on a couple of calls and in those tight game they do.” Photograph: Inpho

Munster coach Rob Penney delivered a scathing rebuke yesterday of Northern Hemisphere refereeing, with a particular emphasis on the Scottish and Italian branches of the Pro 12 League.

Several reports Penney wrote for the benefit of officials have not been shown to the referees in question.

“Some of them probably get lost in the ether,” said the 49- year-old. “I’ve asked a couple of referees, not from Ireland, but other countries ‘Have you seen the reports we’ve sent?’ and they’ve said ‘no’ so that’s an issue in itself. It’s a shame.”

Interpretation
Speaking ahead of Saturday’s Heineken Cup quarter-final against Toulouse, which will be referred by Wales’ Nigel Owens, Penney elaborated on his criticism of Alain Rolland’s performance in the second half of last weekend’s 22-18 defeat to Leinster at the Aviva Stadium.

Rolland awarded the Munster scrum four penalties, which Ian Keatley kicked for a 12-3 lead, but Penney believes the interpretation of two second-half scrums edged the contest in Leinster’s favour.

“There are pivotal moments. There was a scrum on half way that we got penalised for, which is an easy one to give because they are not going to have a shot at goal. They ended up putting it in our 22. If we had got it we would have been in their 22 and carried the momentum on big time.

“The momentum can shift on a couple of calls and in those tight game they do. So let’s hope Nigel has his game face on and is up for the battle.”

The problem with officiating, he continued, is so deep rooted that it’s having an impact on the livelihood of professional sports men.

“You’d love to think that [reports were] all being passed on to the referees and was being discussed deeply, because we do put the effort in. But I do query whether there’s been the in-depth support or education for the referees when they’re busy men themselves.

“I know Lyndon Bray’s set up a triangular communication dialogue between the Sanzar partners and he drives a lot of the discussion down there. And as you’ve heard the odd time from Lyndon he’ll be very open to the media about the standard of refereeing down there . . .”

Unlike Bray in the southern hemisphere, there is no head of referees in the Pro 12.

“Owen Doyle is the one in Ireland who we’ve got a great relationship with and he’s very helpful and Nigel Whitehouse in Wales, not sure about the Italian. We send the Italian one and the Scotland one straight up to Owen.”

Talking to referees
Penney is also concerned about the difficulty Munster captains have had this season talking to referees during games. “Everyone is listening to the referee now so it is easy to pick up if he is getting pissed off or if someone is having a go at him. I’d like to think that our boys – Peter, Varls, James Coughlan – have been very disciplined in the way they addressed the referees.

“We have one instance where we had a guy being a little overbearing and having a little dispute. But that’s very much not the norm for the lads here. So there is no reason why a referee should come here and feel there will be an intimidation factor put on them. They should feel as though they are able to communicate freely with us but at times it doesn’t happen.”

On the injury front, Penney added that Donnacha Ryan was “very unlikely” to be fit for Toulouse’s first visit to Thomond Park while a decision on O’Mahony will be made tomorrow.

“Look, it’s feeling good, if train fully on Thursday I should be good to go,” said the Munster captain.

1 Kevin Babington: Learning to live again after life changed forever on Long Island
2 Tour de France: Every yellow jersey winner must feel guilty by some association
3 Matt Williams: The sky is not falling in on Irish rugby - but Ireland do need a new plan
4 Diminished Dele Alli shows the gulf between talent and expectation
5 Can Thiago bring the right dynamics to save Liverpool from entropy?
Real news has value SUBSCRIBE