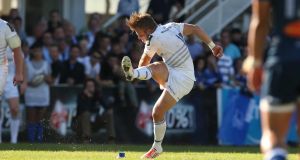 It’s easy in the cheap seats, and they were also altogether cooler than on a pitch bathed in sunshine amid temperatures in the mid-20s, but as ugly, forgettable away wins go, this was right up there.

The honesty of the effort and work-rate could not be faulted, and Leinster deserved to win for the manner they lorded possession and territory, albeit they rarely looked like doing something truly creative, much less score a try, and long before the end it was clear they would be indebted to the boot of Ian Madigan.

That they were, as the 25-year-old centre nailed seven penalties from nine attempts from all manner of distances and angles to steer Leinster to their second win out of two in Pool 2. As those kicking stats underline, Leinster could have few quibbles with the referee Greg Garner, who resisted the baying of a classically pantomime French crowd with an 11-6 penalty count in Leinster’s favour.

The performance wasn’t without its wobbles, notably at the set-scrum where Michael Bent had a torrid time, and even the over-worked Jack McGrath seemed to struggle a little, although there was an improvement when Mike McCarthy was introduced. The lock also put himself about around the pitch while Eoin Reddan injected a bit more zip off the base and sniped where Isaac Boss had unusually declined to do so, but most of Leinster’s game was quite static. Operating off slow ball, they didn’t come onto the ball with much depth and ran laterally, with an emphasis on inside passes but not much by way invention.

On the day he became only the third man in European Cup history to play 100 games in the tournament, after Ronan O’Gara (110) and John Hayes (101), Gordon D’Arcy had little in the way of good ball or space to work with. Devin Toner, Jamie Heaslip and Dominic Ryan epitomised the work ethic with big shifts, Zane Kirchner played with assurance at the back, and it was good to see Luke Fitzgerald looking in great nick physically.

Castres may have rested goal-kicking scrumhalf Rory Kockott, which led to a late debut for their 17-year-old captain of the French under-18s, Antoine Dupont, but as ever when an Irish side have come to the Stade Pierre Antoine this game mattered to Castres, not least as they unveiled their newly built stand, the Tribune Gabarrou, complete with 23 VIP rooms.

Ibrahim Diarra was also promoted to the bench after Mathieu Babillo came into the backrow, meaning they had seven of their starting line-up from last January’s meeting, while injury-riddled Leinster had eight survivors from Castres’ only home defeat last season.

For all their troubles, Castres’ only defeat at home this season was in their opening game, since when they have won three in a row and put 50 on Grenoble three weeks previously and, having taken an early 14-0 lead last January, there was a sense of déjà vu about the way Castres went seven up here.

Leinster set about going through the phases, but they lacked penetration and a couple of monster hits by Ramiro Herrera on Zane Douglas and Jimmy Gopperth, along with one by Richie Gray on Bent, forced a couple of spillages and a turnover.

The home support were whipped up by the gesticulating Herrera after a slow feed from the Leinster scrum enabled Taumoepeau to drive Bent upwards and backwards. That was out of harm’s way though, as Leinster succeeded in managing for the rest of the half – at the end of which they’d enjoyed 73% territory and 64% possession.

Their reward for a solid lineout and plenty of recycling, albeit laboured, were three well-struck penalties by Madigan from ranges of about 30, 48 and 40 metres to punish Tales for going off his feet; Romain Cabannes for a deliberate knock-on; and Puila Faasalele for pulling down a Leinster maul.

Madigan had a chance to extend the lead with the last kick of the half but he pushed a difficult 48-metre penalty wide and then, after Palis had restored the lead when Bent was driven back again, Madigan hit the outside of the upright to a cacophony of boos and whistles.

Palis was wide from about about 45 metres as suddenly the penalties began to flow for the home side – and not just at scrum time – before he nailed two more as Garner pinged Isaac Boss and Heaslip in turn for side entries at a ruck and maul to put Castres 16-9 ahead.

Out of nowhere, although perhaps pointedly at the first complete scrum since the introduction of McCarthy on the tighthead side, Leinster put in a huge shove, which led to a penalty for offside which Madigan unerringly landed from an angle and 45 metres out.

After another protracted bout of patient/laboured recycling – it almost seemed as if Leinster were playing for penalties – Madigan reduced the leeway to a point when Diarra went off his feet and landed another late brace to a cacophony of boos and whistles.

Leinster closed out the final play in utterly fitting fashion with close-in recycles until the clock turned red and Heaslip nudged the ball over the touchline. Gardner was howled all the way to the dressing-room whereupon the crowd exited. Job done.