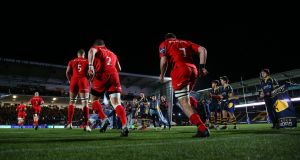 CVC Capital Partners – the private equity firm who recently secured a 27 per cent stake in Premiership Rugby Limited – are one of several such firms who are in negotiations with the Guinness Pro14 and other tournaments and Unions around the rugby world with a view to acquiring similar stakes.

Rugby appears to be reaching something of a crossroads, with the current revenue model in the global game, which is largely dependent upon TV rights, set to be replaced by a more streamlined arrangement.

The Six Nations is seeking to aggregate their television rights in order to reap a bigger dividend, and are in advanced negotiations over a new collective deal also incorporating their autumn Test matches which could come into place from 2022 onwards.

CVC and other equity and investment parties have also entered the picture like never before, and are talking to Unions and Federations, as well as tournaments, around the world. Equity firms bring another degree of expertise in television and broadcasting rights, and other platforms.

When PRL jumped the gun, selling a 27 per cent share to CVC for a reported €225m to €260m – it assuredly intensified these off-field negotiations, with other tournaments and Unions fearful of falling behind the Premiership’s new-found wealth.

But without a crystal ball entering this period of flux – which is liable to run for quite some time – no-one can possibly say how it might all pan out.

That so many outside financial interests are exploring investment in rugby suggest the sport is undervalued, but equity firms are not inclined to invest for the good of a sport’s health.

A report in The Guardian last September when PRL were in negotiations with CVC, under the headline “CVC ownership of F1 should serve as a warning to Premiership Rugby”, stated that CVC paid approximately €1.24 billion for its majority stake in Formula One in 2006 and over the next decade estimates suggest that it made up to £3.5 billion (€3.1 billion).

According to the report, CVC employed Bernie Ecclestone to continue running F1, and state-backed venues willing to pay a fortune for the PR value of hosting F1 left the classic European tracks repeatedly making a loss and, in cases such as Silverstone and Monza, in danger of bankruptcy. In switching from free-to-air TV to more lucrative pay-per-view deals, F1’s worldwide audience has fallen by 137 million since 2010.

Amid the manifold off-field discussions which are taking place World Rugby, and primarily its vice-president Agustin Pichot, are striving to bring into fruition a World Nations League. This plan would have the Six Nations and Rugby Championship be retained, but along with June and November windows would become part of the proposed annual league, culminating in semi-finals and a final.

The Six Nations are reluctant to see its tournament become part of a global TV broadcasting arrangement, thus potentially diminishing its share of revenues from European rugby’s flagship event and its historical status as a standalone tournament, as well as devaluing the World Cup.

The Six Nations are understood to be in advanced discussions regarding a proposal to pool the broadcasting rights of all their home fixtures – including the Six nations and autumn Tests – in order to increase their value. This would also, most likely, constitute a pre-emptive strike against the proposed World Nations League.

It would seem safe to presume that such a proposal for aggregated TV rights would see at least some of the Six Nations move from free-to-air to a subscription-based model. The current six-year deal with the BBC and ITV in the UK for television rights to the Six Nations doesn’t expire end until 2022, so any new deal could not come into being until then.