Injury to Billy Holland the only disappointment on a successful day 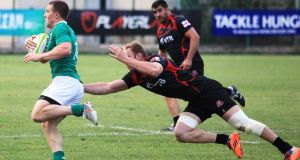 Joe Schmidt watched Emerging Ireland win the Tbilisi Cup in emphatic style with a six-try win over hosts Georgia but only after Billy Holland limped off with a worrying ankle injury.

Ireland’s head coach, along with assistants Simon Easterby and Les Kiss, watched this team of youngsters and World Cup hopefuls weather an early Georgian storm before turning on the style in a second-half blitz of their own.

“It was great to have Joe here  He was satisfied with what we achieved in winning the tournament, but more important was the performance,” said Emerging XV head coach Allen Clarke.

“Undoubtedly there were men out there who have put their hands up for the World Cup squad this year as well as the tournament in 2019, which was always the purpose of this campaign for us.

However there was yet another injury blow as Holland had to discard his crutches to lift the trophy after succumbing to a captain’s curse.   here in Tbilisi.  Munster’s lock took the armband from Rhys Ruddock, who broke his arm in the previous match, only to roll his ankle in the second minute. He briefly played on after treatment, during which time Georgia took the lead through Beziers No8 Lasha Lomidze, before hobbling off in distress.

“We don’t know the extent of the injury yet,” said Clarke.

Georgia also lost their captain, Levan Datunashvili, in the opening minutes with his side ahead 5-0 and Ireland took the lead before half-time through a penalty try   when their driving maul was pulled down short of the line .

Once Ireland’s pack had absorbed the worst, their backs proved lethal. Conan’s burst ended with Healy scoring while the wing’s break was finished by Eoghan Masterson early in the second half.

Georgia replied through a trademark lineout drive but three tries in eight minutes swept their challenge aside.

John Cooney darted through from a scrum, Conway barged over from close range and replacement prop Finlay Bealham   on the pitch for a matter of seconds, capped a resounding second-half display and an impressive victory.