‘He’s always been very, very dedicated and that gets you a long way in life’ 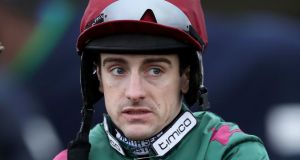 The 34-year-old was confirmed as champion for the 2019-20 season after the coronavirus pandemic abruptly ended the campaign last month.

Hughes started his career as a jockey with Prendergast whose impressive list of former proteges also includes the likes of Kieren Fallon and Charlie Swan.

“He’s always been a very nice boy and a very good jockey. He started his career with me all those years ago and we recommended to him that it would be a good idea to go to England and become a jumps jockey instead of a flat jockey,” Prendergast said.

“We’ve stayed in touch and he rode Katie T to win the Ladbroke Hurdle for me back in 2015.

“We’re very, very happy for him. We could never have visualised that he’d one day be a champion jockey but he’s always been very, very dedicated and that gets you a long way in life.”

Hughes is the first jockey based in the north of England to land the crown in over 40 years.

Cumbria trainer Nicky Richards has used Hughes’s services this season while his father, Gordon, employed former Irish champions of the past, Jonjo O’Neill and Ron Barry.

“We’ve been very lucky at Greystoke as we had Ron Barry and Jonjo who were both champion jockeys. And now we’ve got Brian who has ridden a good few winners for us,” Richards said

“There are definitely similarities between the three of them in that they work very hard and have a lot of self belief.

“Brian always has time and advice for the lads and lasses at the yard and that shows you how much of a decent human being he is.”

Hughes wound up the abridged season on 141 wins, 19 clear of Richard Johnson.

“It is obviously a little disappointing that we haven’t been able to see out the season as we were all looking forward to doing so and there were some big race days to look forward to, but current circumstances are out of all our hands, and racing’s no different,” said Hughes.

“I’ve had another great season with 141 winners and I cannot thank all the trainers, owners, stable staff and my family who have continued to support me and I hope everyone is staying safe at this time.

“Like everyone else, I can’t wait to get back out there riding and will be doing everything I can to keep hold of the title next season.”