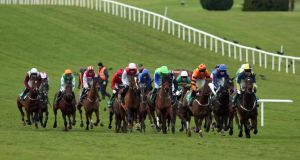 A five per cent increase in prize-money next year is good news for owners.

Horse Racing Ireland’s announcement means total prize-money will be upped from €46.2 million to €48.5 million, a move that was accompanied yesterday by confirmation of reduced administrative costs and greater emphasis on promoting racehorse ownership.

Describing the latter as a priority for 2014, HRI revealed an extra €120,000 will support Irish Thoroughbred Marketing’s work. Racing’s ruling body also announced €311,000 worth of reductions (10 per cent) in administrative charges for owners and trainers. The horses-in-training levy is reduced from €18 per horse to €10.

HRI said it is facilitating reductions through streamlining between it and the Turf Club, and reductions in HRI’s own administration. “HRI’s registration charges have all been frozen since 2008 and these reductions will go some way to retaining horses in training and encouraging new owners to get involved with the sport,” the body’s chief executive Brian Kavanagh said yesterday. “The decline in ownership since 2008 is one of our greatest concerns.”