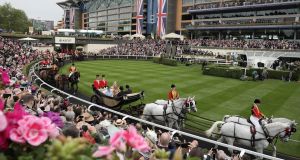 Queen Elizabeth II and Queen Maxima of the Netherlands arrive for the first day of races at Ascot in 2019. This year’s meeting will go ahead behind closed doors from June 16th. Photograph: Dan Kitwood/Getty Images

Ascot is odds-on to be the first major British sporting event to take place behind closed doors this summer after the British Horseracing Authority confirmed its intended timetable for a series of major races, including the first four Classics of the season.

It will be a Royal meeting like no other if the five-day event opens as scheduled on June 16th, with no royal procession, morning suits or millinery and without England's Queen Elizabeth in attendance for the first time in her 68-year reign.

However, with eight of the Flat season’s Group One races due to be run at the meeting, staging Royal Ascot in its traditional slot in the calendar would be a major boost to an industry that has been idle since the lockdown began in mid-March.

Several of the season’s most valuable and competitive handicaps are also run at the Royal meeting, including the Royal Hunt Cup and the Wokingham Handicap, adding to its appeal to the betting public at a time when most major sports could still be idle.

While the BHA said on Wednesday evening that there “will be some changes to the order of races at Royal Ascot, which will be confirmed as soon as possible,” the meeting’s 20 Group and Listed races “will now also be open to international runners”, while there is also expected to be “a suitable number of novice/conditions races for two-year-olds scheduled [in early June] to ensure horses can have a chance to run prior to Royal Ascot”.

In the latest provisional schedule for the resumption of top-class racing, the 2,000 Guineas and 1,000 Guineas would be run on June 6th and 7th respectively – within a week of the anticipated return to action, subject to government approval, on June 1st.

As a result, runners in both Classics would line up without a prep run, but several trials for the Derby and Oaks have been included in the provisional programme, including the Lingfield Oaks and Derby Trials on June 4th and 5th . The Epsom Classics are now scheduled for July 4th, following a meeting on Tuesday evening that approved plans to create an exclusion zone around the racecourse to keep spectators away. – Guardian