Golfer’s success brings ‘pride and joy to the Irish everywhere’ 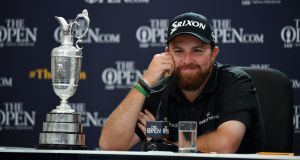 The President said the Offaly man’s victory was not only a “great personal achievement but an historic win”.

“His triumph today, on a magnificent course and buoyed by a vociferous crowd, means he has joined Fred Daly, Pádraig Harrington, Darren Clarke and Rory McIlroy as the fifth Irish winner of the Open,” Mr Higgins said.

“His success today will have brought pride and joy not only to sports fans around Ireland but to the Irish everywhere, and as President of Ireland I want to congratulate Shane on his achievement and on being such a positive role model both on the course and off.”

Lowry (32) finished 15 under par, six shots ahead of England’s Tommy Fleetwood, on Sunday evening to become the fifth Irish winner of the Open.

“The crowd here in Portrush have been immense – you’ve made the island of Ireland so proud,” he said.

Minister of State with responsibility for Tourism and Sport Brendan Griffin also paid tribute to the golfer.

“Congratulations to Shane Lowry on an outstanding performance at today’s Open Championship. His first Major title which will undoubtedly pave the way for many future victories by this sporting hero,” he said.

Tánaiste and Minister for Foreign Affairs Simon Coveney said it was “an incredible win” for Lowry.

Fianna Fáil leader Micheál Martin said it was hard to find “a more decent, genuine sports star, at home or abroad, than Shane”.

“He absolutely deserves this victory.”

“Shane Lowry has delighted the nation,” he said.

“You have done our island proud. Well done to all those involved in organising and ensuring that the Open was such as massive success. You have showcased the very best the north coast and Ireland has to offer,” she added.

Lowry’s granduncle Tommy Newman said he was an “unbelievable” player even as a teenager.

“He had no fear in him, the biggest thing about Shane was he never showed any fear. We believe in him, you can see it here, how much we believe in him. He is one of the best,” he told RTÉ Six One News.