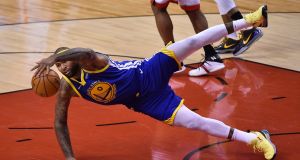 For the first four games of the NBA finals, the question lingered: would Kevin Durant play? The two-time NBA finals MVP had not played since suffering a calf strain in Game 5 of the Western Conference semi-finals. The Warriors were dogged by questions about whether they could claim their third NBA championship in a row without him.

The short answer is that the Warriors are still capable of doing just that, after a thrilling 106-105 win over the Toronto Raptors in Game 5. Even as chants of “KD sucks” rained down from the seats of Scotiabank Arena, Durant showed what he is capable of, making his first two three-point attempts with ease. The Warriors followed Durant’s lead, going five-for-five from beyond the arc to start the game, making life difficult for the Raptors.

But it was not to last. Durant limped out of the game midway through the second-quarter and the Warriors general manager, Bob Myers, later confirmed the 30-year-old had sustained an achilles injury. If that is true, his series is almost certainly over.

Durant, for his part, put on a brave face. “I’m hurting deep in the soul right now I can’t lie,” Durant wrote on Instagram after the game. “But seeing my brothers get this win was like taking a shot of tequila, I got a new life.”

Durant left the court to classless cheers from the Toronto crowd. If anything those cheers inspired the Warriors: they promptly went on a 12-5 run and went into half-time with a 62-56 lead. The Raptors slowly clawed back that lead in the second-half, and late in the game it appeared their star player, Kawhi Leonard, had secured the win that would land them the title. He went on a 10-0 run and the Raptors had a six-point lead with just over three minutes remaining. But even without Durant, the Warriors still have Stephen Curry and Klay Thompson. The Splash Brothers hit three-straight three pointers to give the Warriors a one-point lead with under a minute to go. Toronto had a chance to win it at the buzzer, but Kyle Lowry missed his chance.

“We had a chance to win a championship tonight and we didn’t do it,” Raptors guard Fred VanVleet said. “We didn’t play well enough, we didn’t execute enough down the stretch and that stings a little bit.”

Though this Warriors team hasn’t shown it for the majority of this series, Game 5 served as yet another reminder: that they are not a good team, but a great one. A team that can showcase game-winning poise when needed. And that poise will continue to make life difficult for the Raptors as the series heads back to California for Thursday’s Game 6. With or without Durant. - Guardian