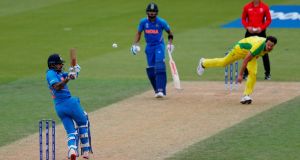 India’s Shikhar Dhawan in action playing a shot from Australia’s Nathan Coulter-Nile during the 2019 Cricket World Cup group stage match between India and Australia at The Oval. Photograph: Getty

Dhawan’s 117 steered India to 352 for five, their fourth-highest World Cup total, with Bhuvneshwar Kumar claiming three wickets for 50 runs and Jasprit Bumrah three for 61 as Australia were dismissed for 316.

India skipper Kohli posted a punchy 82 and also ordered his fans to stop booing Australia’s Smith, who is still receiving abuse about his now-served ban for ball tampering.

Former captain Dhoni knocked 27 from 14 balls in a neat cameo, but gained most attention for keeping wicket without the Indian army dagger symbol on his gloves.

India’s wicketkeeper was reprimanded by the International Cricket Council (ICC) for wearing the army insignia during the opening World Cup win over South Africa and warned not to display the symbol again.

Dhoni is an honorary Lieut Col of India’s territorial army and so enjoys the privilege of sporting the symbol on his kit. But the 37-year-old opted to avoid a collision course with tournament chiefs at The Oval, removing that army livery from his gloves in the field.

The controversial Zing bails failed to fall for the fifth time in the tournament too, Warner getting the break despite playing Bumrah on to his own stumps.

The ICC insists the light-up bails do not even weigh as much as the heavy bails regularly used in high winds. But the frequency of stumps being hit without bails falling has confounded many top players and a host of observers.

Bumrah pressed on undeterred, however, claiming the timely wicket of Usman Khawaja in another fine seam-bowling performance.

India’s second successive win in the competition forced Australia into a first defeat in their third match.

Rohit Sharma backed up his unbeaten 122 against South Africa with a smart 57, as India racked up a sizeable score without ever truly cutting loose at the crease.

Kohli’s 82 means he now boasts 91 scores of 50 and higher since his 2008 ODI debut, with Kumar Sangakkara the next closest with 66.

The Oval was a sea of blue shirts and those Indian followers dished out heavy boos to former Australia captain Smith when he went out to field on the boundary.

India’s captain knew immediately what the fuss was about, waving at the supporters and ordering them to clap instead. They responded to his appeal.

Smith thanked Kohli on the field for the gesture and this proved to be a match played in the right spirit.

Australia might be less respectful internally when reviewing this result however, with Finch and company not nearly aggressive enough with the bat.

Alex Carey smashed a quick 55 in the closing stages but not even that could rattle India, who produced another statement of intent in storming to another victory.

Lions squad set to have a greater spread than four years ago 22:00
Warren Gatland hopeful that Lions itinerary will be finalised this week 22:00
Blackmore back among the winners at Fairyhouse 22:00
Elite athletes still required to undergo 10-day mandatory quarantine 20:32
Klopp says Liverpool need ‘perfect performance’ to overcome Real deficit 20:00