Murphy misses out on breaststroke final in Barcelona 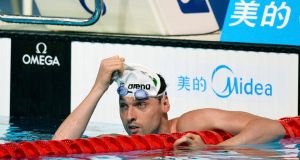 Ireland’s Barry Murphy after finishing sixth in his heat of the 50m breaststroke at the World Swimming Championships in Barcelona to qualify for the semi-finals. Photograph: Andrea Staccioli/Inpho

Ireland’s Barry Murphy finished 14th in the 50-metres breaststroke at the Swimming World Championships at the Palau Sant Jordi in Barcelona, Spain yesterday.

Swimming in the first semi-final, Murphy was unable to better his time from the morning heat of 27.52 and finished seventh in the semi and 14th overall in a time of 27.78.

A disappointed Murphy said: “I had more expectations and higher goals than 14th. I didn’t execute tonight, I tried to make some changes from this morning and it just didn’t happen.

“I felt like I was in a good place going into the swim, I was excited to be in the semis but I didn’t produce it on the day. It’s unfortunate, but that’s sport.”

Cameron Van Der Berg was again the fastest qualifier from the semi-finals in a time of 26.81.

Murphy will now look to his final event at the championships, the 50m Freestyle heats on Friday. There are no Irish swimmers in action at World Championships today.

The pool
Tomorrow, Sycerika McMahon will be back in the pool in the 100 metres freestyle and Fiona Doyle will race in the 200 metres breaststroke.

However yesterday American teenager Katie Ledecky smashed the world record in the women’s 1,500 metres freestyle final by more than six seconds during a glittering session for the United States

The 16-year-old from Bethesda, who also won the 400 freestyle gold medal on Sunday, powered away from defending champion Lotte Friis of Denmark in the final stages to break the previous best of 15:42.54 set by compatriot Kate Ziegler in 2007.

It was the second world record of the championships in the specially constructed pool at the hilltop Palau Sant Jordi after Ruta Meilutyte’s mark in qualifying for the 100 metres breaststroke on Monday.

Lithuanian Meilutyte went on to claim a first world championship gold for the tiny Baltic nation when she triumphed in yesterday’s final. She was unable to better Monday’s effort but still produced the second-fastest time ever of 1:04.42, just seven hundredths slower than her record 1:04.35.

Ledecky’s team mate Missy Franklin, who won four gold medals and one bronze in last year’s London Olympics, secured her second gold of the week with victory in the 100 metres breaststroke and Matt Grevers claimed the 100 metres backstroke title.

1 Seán O’Brien: Anger over my parents’ break-up never left me
2 Ireland 50 Italy 17: Ireland player ratings
3 Ireland get the job done against Italy to keep alive Six Nations hopes
4 Hugo Keenan and Will Connors: The best of friends, the best of debuts
5 France warm up for Ireland with impressive win over Wales
Real news has value SUBSCRIBE