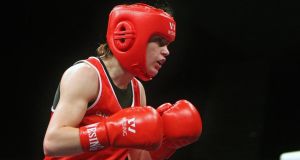 Katie Taylor’s journey into the record books continued at a gallop with a unanimous win over Estelle Mossely. The 28-year-old beat the French boxer over four dominant rounds to earn an unprecedented sixth successive European title.

The Bray lightweight has not lost a European fight since she started her remarkable run back in 2005.

All week in Bucharest the expectation on Taylor was that she would add to her collection that now not only sets her apart from Irish boxers but from those around the world. She holds all the major titles at European, world and Olympic level.

Mossely, a surprise semi-final winner over Russia’s Sofya Ochigava, was a rangey counter puncher, who had her stall set out from the beginning. But as others have discovered, Taylor’s speed and power were too much. Her left jab was the first scoring shot in the opening round, consistently beating her French opponent to the punch. Mossely had a longer reach and a sleight height advantage but Taylor’s movement and tempo was unmatched, a big right hand landing just on the bell.

The fight never changed, the gold medal was always going back to Ireland, with Taylor switching from jab to combinations, the back hand always dangerously arching in. Mossely is a talented fighter and while there was a marked difference in ability, she did catch the Irish champion a few times, a point her father and coach Pete said would be corrected before the World Championships in the autumn.

“I was thinking about it all week that I wanted to make history,” said Katie. “Zaur and my dad are the best coaches in the world. I just absolutely delighted and I want to thank everyone for all their prayers and support through out this week. A six time European Champion . . . god’s hand was on me all week.

“Yeah it’s a lot to take in,” she added in an emotional post fight press conference. “The best thing about is I believe my best is yet to come. I’ve got the World Championships this year as well and the Olympics hopefully in a couple of years. Hopefully I’ll get the chance to defend all those titles.”

The final outcome inevitably moved towards 3-0 for Taylor, a feint of a left in the third round and a right hand crashing in on Mossely helping the judges on their way to chosing the winner in red, the same colour she wore in the Olympic final.

“It’s unbelievable what she’s achieved,” said Pete. “Olympic and world champion, it’s unbelievable and I can’t actually put it into words. But I think Katie can improve. I think she will improve. After she takes a bit of a rest when we get home we will start looking at the World Championships.

“At this point she’s a bit like Brian O’Driscoll, she has to look after her body a little bit more carefully. But she doesn’t drink and she doesn’t smoke and she lives a clean life, so I expect her to improve over the next few months.”