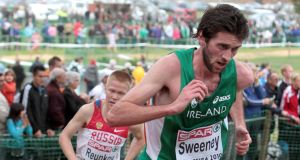 It is more by accident than design that Monday’s Dublin Marathon is poised to produce the first Irish men’s winner in 20 years. Not that marathon running has ever been entirely predictable.

What is certain is that no elite international runners have been invited to this year’s race, initially for financial reasons, then the logistical: it means the race for first place, both men and women, will be mostly domestic, although not without some potential for surprise.

In late March, with the Dublin organisers still searching for a headline sponsor (to replace the National Lottery), it was agreed, due to financial restraints, to eliminate the elite athlete fund, and cut the overall prize-fund by one-third.

Then, in late June, it was announced that Airtricity had come on board as sponsors for 2013. By then, however, it was too late for the organisers to reverse their decision on inviting elites, with that paving the way for the first Irish men’s winner since John Treacy, in 1993.

Since then, the men’s race has been won 11 times by a Kenyan runner, twice by a Russian and Ukrainian, and once by an Ethiopian, a South African, a Scot, and a Welshman.

The wait for an Irish women’s winner hasn’t been quite as long, as Sonia O’Sullivan was first home in 2000, in her marathon debut.

“During the summer, even after Airtricity came on board as sponsors, we decided not to change our decision not to invite any international elite runners, for a couple of reasons. We’d already informed the various agents and managers that we wouldn’t inviting international runners this year, wouldn’t be providing a visa, so that they could opt for other races, as required.

Domestic field
“We’d also informed our own Irish athletes, and those involved in the Dublin Marathon Mission, that it would be a domestic field only, which gave them an extra reason to target Dublin this year, and in fairness we didn’t want to go back on that decision, either.”

Coppinger is confident that no unknown Kenyan or Ethiopian will show up next Monday without warning: “Well they won’t have got here without us issuing a visa. Normally they would apply through the Kenyan federation, or Ethiopian federation, or wherever, and that would then be cleared by Athletics Ireland and ourselves. But that hasn’t happened this year. So no, they won’t show up without warning. Not with a race number anyway.”

In the meantime Renault also came on board as one of Dublin’s associate race sponsors, and will present a new Fluence ZE (valued at €30,000) to both the men’s and women’s winner.

Happy winners
Last year, the first man and first woman each got €15,000, so whoever does win on Monday will still walk away a happy man and woman.

Dublin has also doubled as the Irish marathon championship for the last number of years, those titles won last year by Paul Pollock (who finished ninth overall, in 2:16.30), and Maria McCambridge (who ran a lifetime best of 2:35.28).

McCambridge, although now aged 38, is back to defend her title and with that chase an outright women’s victory, with Cork’s Claire McCarthy likely to be her closest challenger – although the men’s race is a lot more open, especially given Pollock’s absence due to his participation in the World Championship marathon in Moscow, in August, where he finished 21st overall, and second best European.

There are several contenders, including Sean Hehir, Tomas Frazier, Gary O’Hanlon, and the Moldovan-born Sergiu Ciobana, with Alun Evans from Wales, who has entered individually, also capable of outright victory.

However, pre-race favourite is Joe Sweeney, even though Monday marks the marathon debut for the 28-year-old Dubliner, coached by former two-time Dublin marathon winner, Jerry Kiernan.

“Unless my eyes are deceiving me, Joe looks to be in pretty good shape,” says Kiernan.

“To be quite honest, I’d be disappointed if he didn’t win it. Of course these things can blow up in your fast. No one can be definitive about anything when it comes to your first marathon. It’s a different race entirely.

“But we were training in Italy, about three weeks ago, on the shores of Lake Garda, and he ran 27 miles, maybe 28. I was on the bike, trying to keep up with him, and he was hugely impressive that day.

Unusually tall
He’s unusually tall for a marathon runner, and I would be concerned about him carting his big frame around, but he’s tough. Of course, everyone will be tiring over the last three or four miles. My hope is that Joe will be slowing down the least.”

And if Sweeney is the first man home, he’ll end the 20-year wait for an Irish winner that has rested on Treacy’s slender shoulders since he won Dublin in 1993, clocking 2:14.40, and the last ever marathon, as it turned out, for the 1984 Olympic silver medallist.