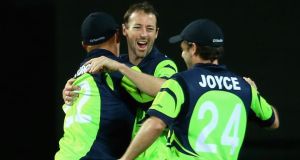 Alex Cusack is congratulated by Ireland team-mates Kevin O’Brien and Ed Joyce after getting the wicket of Tawanda Mupariwa of Zimbabwe to complete a five-run win in their Pool B World Cup game at Bellerive Oval in Hobart. Photograph: Quinn Rooney/Getty Images

Despite claiming the scalp of a second Test-playing nation in the nerve-racking five-run victory over Zimbabwe, Ireland still require one win from their final two World Cup Pool B games against India and Pakistan next week to claim a place in the quarter-finals.

With Pakistan stunning South Africa in a 29-run weather-affected win over New Zealand in Auckland, it now means that Ireland join those two teams on six points, albeit with a game in hand on both.

That game comes against world champions India in Hamilton on New Zealand’s north island on Tuesday, with the squad set for a busy transit through Sydney and Auckland on Sunday that will limit their preparation time.

Although India had a longer route from Perth they have enjoyed the luxury of an extra 24 hours after their four-wicket win over West Indies at the Waca on Friday.

The Windies remain in the qualification picture due to their final game coming against a bottom of the table UAE side. A win would also put them on six points, and they could significantly boost their run rate also.

It may all come down to a battle of the bright green shirts against Pakistan next Sunday at the Adelaide Oval, but Ireland will bring the same mindset that has given them three wins from four to date for the clash with India.

And even though India have already qualified for the quarter-finals, Ireland captain William Porterfield expects no gifts in Hamilton with MS Dhoni’s side also looking to break their record of consecutive World Cup wins and make it nine on the bounce.

Asked whether be believed India would take their eye off the ball after making the last eight, Porterfield said: “No, I don’t think their guard will ever be down. They’re a squad of 15, so whatever they decide to do, they decide to do.

“It’s a long tournament, and they’re not going to look to lose any momentum from their point of view. Whatever they decide to do is out of our control. Whoever they decide to play, it doesn’t really bother me. But yeah, we’ve just got to keep all the momentum going and keep on improving at the little things we want to and keep taking things forward.”

Squad rotation and even rotation of the batting order paid off handsomely for Ireland in the win over Zimbabwe, with Ireland posting their highest total in a One-Day International of 331 for eight, two more than they made in the famous run chase against England during the 2011 World Cup in Bangalore.

Will India field their strongest XI?

Ed Joyce took full advantage of being dropped on three occasions to score his second ODI century for Ireland and a third overall after his ton for England in Sydney back in 2007. And Andrew Balbirnie was moved up the order to four in a masterstroke that saw the 24-year-old Middlesex batsman score 97 and share a 138-run third-wicket stand with Joyce.

With Niall O’Brien due to come in after Porterfield’s scratchy innings came to an end on 29 from 61 balls, the decision was taken to switch to a left-right combination.

“That came out as we were talking about it in the dugout, we thought it might be slightly easier with the right-left (combination),” confirmed Porterfield. “He’s flexible in the way he’s been striking the ball . . . and that partnership was a very firm partnership and got the momentum into the innings and set it up then for the back end.”

Balbirnie would fall short of a deserved first ODI century when he was run out by a brilliant throw from Regis Chakabva while attempting a second run to retain the strike in the final over, but his 97 from 79 balls was an incredible performance for a player who only cemented his place in the batting line-up over the winter.

Joyce, 36, was full of praise for Balbirnie, who is averaging a shade under 50 in his first major tournament.

“Yeah, he’s been brilliant the last six months as he’s come into the team. He played brilliantly against South Africa, obviously we got beaten very well in that game, but he gave us 60-odd,” said the Sussex left-hander.

“He took the pressure off me today, hit his first ball for four and just rotated his strike really well, and that gave me the ability to sort of do the same thing and the confidence to do that as well.”

The other inspired decision came in the selection of Clontarf all-rounder Alex Cusack after he was left out of the games against West Indies and South Africa.

The 34-year-old was outstanding throughout the Zimbabwe reply, bowling an opening spell of one for 11 in five overs, giving away 13 runs and taking a wicket in three powerplay overs and taking two wickets in the first three balls of the final over to end the match with Ireland only having six runs to play with.

“He never really seems to let us down, and today was no different,” said Porterfield. “Considering Zimbabwe nearly chased down 330, four for 30 is a fantastic effort.”

Included in Cusack’s haul was Zimbabwe captain Brendan Taylor, who was deceived by a slower ball after making a brilliant 121 from 91 balls.

But it was the wicket of Sean Williams that would provide the biggest talking point when he was caught on the leg-side boundary by John Mooney aiming to bring up his century with a six.

Mooney’s left foot was right beside the plastic cover that denotes the boundary, with commentators pointing out that there may have been contact as the North County player completed a quite brilliant catch.

Williams left the playing area while the catch was being reviewed, with Taylor saying he took the player’s word that there was no contact. Indeed Mooney looked liked he planted his left foot right beside the boundary marker to give himself the steady base to pull off the catch.

“Yeah, I think there’s fine lines there when you tend to take the player’s – the fielder’s call – and trust his word for it,” said Taylor.

“I couldn’t really see from the big screen if there was enough evidence, and by the time he’d walked off the park, they’d sort of zoomed in on it. From that perspective we thought it was just a clean, clear catch. But it’s gone. Can’t change it.”

Porterfield praised the skill of Mooney in executing the catch under extreme pressure in a game in which Ireland’s fielding proved the difference.

“Look, I thought it was a fantastic catch. They showed great skill under pressure. It was close to the line, we saw a couple replays on the big screen, which is obviously pretty inconclusive from there,” remarked Porterfield in his post-match press conference.

“But it’s very difficult to tell when you’re a fielder on the rope and especially under pressure and the way he took the catch was a great skill.”

1 ‘Manchester United are lucky to have you’: Klopp responds to Donegal schoolboy’s letter
2 Six Nations 2020: England v Ireland - Ireland player profiles
3 Ireland wary of Peyper calling the tune as they head for Twickenham
4 Six Nations: Ireland v England all you need to know guide
5 Mystery mechanism could steer Mercedes to another Formula One title
Real news has value SUBSCRIBE