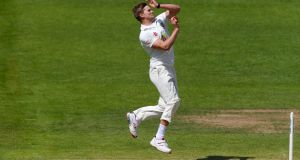 Durham bowler Barry McCarthy could be in line to make his Ireland internatinal debut in the first KPC Series One-Day International against Sri Lanka at Malahide on Thursday. Photograph: Stu Forster/Getty Images

Ireland’s cricketers may be struggling somewhat to show up on the sporting radar in this choc-a-bloc week of international action, but they intend to grab some headlines of their own in the two-match KPC Series against Sri Lanka at Malahide.

It’s the start of a busy summer of international cricket with a five-match ODI series against Afghanistan in Belfast in mid-July, while Pakistan will visit Malahide in August for two ODIs.

Ireland are still to record a victory over a Test-playing nation in Dublin, with the win over Bangladesh at Stormont back in 2010 the only home ODI victory in 11 years of playing at the level.

The bar has been hit on occasion, with the tie against Pakistan in 2013 at Castle Avenue the most glaring entry in the one that got away folder.

Ireland skipper William Porterfield believes the extra fixtures this summer open up the possibility of ending that streak.

“It’s something that hangs around, it’s always being mentioned and I think this year is a great opportunity with the volume of fixtures,” said the Warwickshire batsman.

“Some of the positions we’ve been in we have been disappointed not to get over the line. You can name quite a few games like that, we’ve had Australia on the rack, we’ve had Pakistan on the rack, even England when they were here in Malahide as well.

“We’ve been putting ourselves in these positions and we just have to follow that through for the full 100 overs and I’m confident that we will do that this week.”

Ireland’s preparations have been hit by late changes to the squad after Niall O’Brien tore a calf muscle while playing for Leicestershire against Warwickshire, an injury that will sideline him for four to six weeks. All-rounder Stuart Thompson will not play in the two games against Sri Lanka after pulling out of the 13-man squad for personal reasons.

Max Sorensen replaces Thompson and has been back bowling after recent injury and illness, impressing national coach John Bracewell with his six-wicket haul in Ireland A’s win over their Scottish counterparts in last week’s three-day game in Ayr.

Bracewell had admitted that Merrion batsman John Anderson was unlucky to miss out on the original squad and he comes in for Niall O’Brien on the back a great start to the season that has seen him already pass the 1,000-run mark between club and representative cricket.

The South African-born batsman may have to bide his time before earning his first ODI cap, with Bracewell likely to go with Stuart Poynter in his batting line-up.

Poynter’s Durham team-mate Barry McCarthy could be in line to earn a first cap, the 23-year-old bowling all-rounder from the Pembroke club in Sandymount having had a fine start to the season with the ball for the English county.

Porterfield has been impressed with McCarthy’s ability to adapt quickly to the international set-up, with the player also gaining from his time with the Randwick Petersham club in Sydney over the winter thanks to a tie-in with Cricket Ireland.

“He’s settled in very well, he had a couple of days with us in Australia when we were there in January and he impressed a lot with his work ethic and how he approaches it and he doesn’t seem fazed by it,” said Porterfield.

“I’m looking forward to him getting out there, he’s had a good few games for Durham firsts this year, which has been good for him.”

McCarthy has proved a bit of bolter over the past 12 months and although he has always been marked down as a future international, injury has held him back in recent times.

Full-time cricket seems to have worked wonders on McCarthy, who is excited at the possibility of making his international debut over the coming days.

“I always felt I was capable of playing at the top level and getting a go,” said McCarthy. “Staying fit has been a real key because over the last two seasons I haven’t really missed any cricket, so touch wood that can keep going. I think the consistency of playing so much cricket and when there’s a couple of players falling down around you, just getting a chance and taking the opportunity.”

McCarthy was certainly licking his lips at the thought of bowling at Sri Lanka on a Malahide pitch showing plenty of green shoots after the rain of recent days.

The touring side lost the opening two Tests to England in comprehensive fashion, bowled out for scores of 91, 119 and 126 before Dinesh Chandimal’s knock of 126 saw them make 475 in their second dig at Chester-le-Street.

Ireland all-rounder Kevin O’Brien certainly believes conditions will help the home side on Thursday and for Saturday’s second encounter.

“Everything is falling slightly in our favour but we still have to go out and perform well,” said O’Brien, who has impressed during his T20 contract at Leicestershire.

With Boyd Rankin set to make his first appearance home back in Ireland colours and Middlesex opening bowler Tim Murtagh also in good form, the toss could prove vital.

“There’s a big opportunity for us to get a series win against one of the top-ranked sides,” added Porterfield. “That’s what we’re looking to do and there’s no reason why we can’t come away from this with a 2-0 win. That all starts tomorrow and it’s going to be exciting and it’s real opportunity for us.