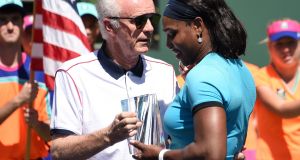 The CEO of Indian Wells Raymond Moore has stepped down from his role after comments he made about women’s tennis. Photograph: Afp

Raymond Moore, the CEO of the Indian Wells tennis tournament, has resigned from his role, one day after saying that the women’s tour “rides on the coat-tails” of the men’s game.

Moore was roundly criticised after he proclaimed that women in tennis “don’t make any decisions” and are “very, very lucky”, during an interview before Victoria Azarenka beat Serena Williams in the women’s final on Sunday.

“If I was a lady player, I’d go down every night on my knees and thank god that Roger Federer and Rafa Nadal were born because they have carried this sport. They really have.”

He went on to describe several female tennis players as “physically attractive”.

Moore later apologised, saying his comments were “in extremely poor taste” and that he was sorry. But the damage was done and members of tennis community were swift to voice their dismay on Twitter.

Serena Williams responded to Moore’s remarks, saying: “Obviously I don’t think any woman should be down on their knees thanking anybody like that.”

“I think Venus [WILLIAMS], myself, a number of players have been – if I could tell you every day how many people say they don’t watch tennis unless they’re watching myself or my sister, I couldn’t even bring up that number.

A statement from Larry Ellison, owner of the Californian tournament, on Tuesday said Moore had “decided to step down”.

“I fully understand his decision,” he said.

The statement went on to laud the progress of women’s tennis “thanks to the leadership of Bille Jean, Martina Navratilova, Venus Williams, Serena Williams and so many other great women athletes”.

“I would like to personally thank all the great women athletes who fought so hard for so many years in the pursuit of equal prize money in professional tennis. And I’d like to congratulate them on their success,” it went on.

On Sunday, Novak Djokovic, who won the men’s final at Indian Wells, sparked further controversy after saying that male players should get more prize money than their female counterparts because their game attracted more viewers.