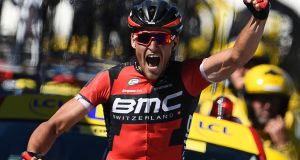 Greg Van Avermaet soloed to victory on stage five of the Tour de France in Le Lioran to take over the yellow jersey for the first time in his career.

The BMC rider had been part of a nine-man breakaway early in the 216km stage from Limoge but left behind the last of the other escapees — fellow Belgian Thomas De Gendt of Lotto-Soudal — at the foot of the penultimate climb of a challenging day which took the race into the Massif Central.

The second Tour stage victory of his career came by two minutes and 34 seconds from De Gendt, with the peloton five minutes and seven seconds back.

Defending champion Chris Froome finished ninth, leading the general classification hopefuls home, and although he has seen his deficit to yellow balloon from 14 seconds to 5:17, the Team Sky man will not be unduly concerned with Classics specialist Van Avermaet not considered a contender over the three weeks.

Tinkoff’s two-time Tour winner Contador lost further time on the final climb as he continues to the feel the affects of two crashes in the first two days, finishing a further 81 seconds behind Froome’s group, while his team-mate Sagan has bid farewell to yellow for this Tour, having come home some 23:37 behind Van Avermaet.

The world champion swapped yellow for green as he leads the points classification by four points from Mark Cavendish.

Giro d’Italia winner Vincenzo Nibali also cracked late on and finished almost 14 minutes after Van Avermaet — a result which puts to bed any notion of him challenging fellow Italian Fabian Aru for supremacy within the Astana team.

It took time for the day’s nine-man breakaway to establish itself and once they had pulled around seven minutes clear, Van Avermaet, De Gendt and Andriy Grivko of Astana kicked again.

The peloton were happy to let them scrap amongst themselves for the stage win — and the yellow jersey — as the lead ballooned to 15 minutes before starting to fall once they reached the final 40km, which contained four categorised climbs.

Van Avermaet then left De Gendt behind on the penultimate climb of the day, the Col du Perthus, still 17km from home.

By the summit, the Belgian had pulled out a gap of 55 seconds over De Gendt, and was on his way to victory.

European Tour confident Middle East tournaments will proceed as scheduled 19:45
Two-time Major winner Angel Cabrera arrested in Brazil 19:18
Bruce tells Newcastle players from now on ‘we will do it my way’ 19:09
VAT fears eased as Willie Mullins’ Grangee enters UK without charge 19:13
Packers have the quality to overcome resolute Rams 19:00