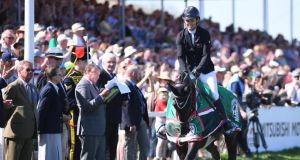 New Zealand’s Jonelle Price improved from 28th after dressage to becoming the first woman in 11 years to win the Mitsubishi Motors Badminton horse trials when show jumping clear on Sunday with Classic Moet.

The 37-year-old mother of one, who is based in Wiltshire with husband Tim Price (he finished 12th on the Irish Sport Horse gelding Ringwood Sky Boy), had a fence in hand when taking on the Paul Connor-built show jumping track. She didn’t it as, despite rattling some poles, Classic Moet left them all in place for Price to complete on a total of 28.4 penalties

The New Zealander, who has ridden Trisha Rickards’s British-bred mare Classic Moet since 2013, had taken over the lead following Saturday’s cross-country phase when she had been nearest to the optimum time. A 16-year-old, Classic Moet had two foals this year by embryo transfer.

Britain’s Oliver Townend finished second - not on his Burghley winner of last year, the ISH gelding Ballaghmor Class on which he held that position overnight but had two fences down to place fifth (36 penalties) - but on Cooley SRS which show jumped clear (33.1). An 11-year-old ISH by Ramiro B, this gelding was bred in Co Wexford by John Fitzhenry out of the Kiltealy Spring mare Ballynattin Pride.

Riding Allstar B, Britain’s Rosalind Canter finished third (34.3), a position she occupied from the dressage phase, while her compatriot Gemma Tattersall was fourth (35.2) on the Irish thoroughbred Arctic Soul, a 15-year-old Luso gelding which ran four times on the racecourse without distinction back in 2008. New Zealand’s Mark Todd partnered the ISH gelding Kiltubrid Rhapsody, an 11-year-old by Cascaletto St Ghyvan Z, into sixth (37.4).

England-based Padraig McCarthy finished best of the Irish in eighth with Mr Chunky (38.3). The 13-year-old British Sport Horse gelding, which used to be ridden for Britain by McCarthy’s wife, Lucy Wiegersma, show jumped clear on Sunday but the combination picked up three time penalties. Joseph Murphy was next best in 13th with Sportsfield Othello (49.3), Ciaran Glynn finished 25th on November Night (66.2) while Alan Nolan placed 52nd with Bronze Flight (128.2). Fifty-three of the 78 starters completed all three phases.

At home, Co Meath’s Sarah Ennis won Sunday’s second leg of the Connolly’s Red Mills Superleague at Rosanna House with Horseware Stellar Rebound on which she finished best of the Irish in seventh at last year’s European championships in Poland.

The Irish combination were one of 12 to advance to the jump-off of the 1.55m competition where they recorded the fastest second round clear in 37.37. Belgium’s Pieter Devos slotted into second on Apart (38.19) with Co Mayo’s Cameron Hanley finishing third on EIS Isaura (38.70). Lynch’s victory was Ireland’s second at the five-star show following Darragh Kenny’s win in Friday’s Caixabank Trophy with Cassini Z.