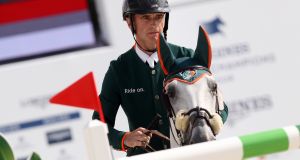 Riding Onyx Consulting’s GC Chopin’s Bushi, the Tipperary native was one of nine riders who progressed to the second round of the 1.55m competition where he was one of just four to record a double clear. Lynch stopped the clock on 39.42 seconds with the 14-year-old Dutch Warmblood but this wasn’t fast enough to take over the top spot from the host nation’s Steve Guerdat on Victorio des Frotards (36.98).

On Thursday, Lynch and GC Chopin’s Bushi (63.10) were fourth behind the French combination of Julien Epaillard and Queeletta (59.57) in the night’s 1.50m speed competition.

Kilkenny’s Ger O’Neill is also competing at the Swiss venue. On Thursday, he partnered Martin Egan’s Castlefield Vegas to (63.02) finish fourth in the 1.40m speed class won by Switzerland’s Martin Fuchs on Avenir d’Aiguilly (62.01). On Friday afternoon, with a fence down, O’Neill and the 10-year-old Irish Sport Horse gelding placed sixth (62.02) in the 1.50m speed and handiness competition where the fastest clear came from France’s Roger Yves Bost on Castleforbes Talitha (54.60).

On Friday, in the main 1.45m speed competition, where he partnered Argan de Beliard (62.55), the Portuguese rider finished second, sandwiched between Pender’s two mounts. The Kildare rider won on HHS Fortune (61.28), a nine-year-old bay by Catoki, and placed third with Casanova van Overis Z (62.61) which is owned by Studfarm Overis and the Hughes Bravo team.

The two-star show should have concluded on Saturday but all competition has been cancelled because of heavy rain, strong winds and flash-flooding.

While FEI affiliated classes don’t start until next week, the 2020 Winter Equestrian Festival got under way on Wednesday at the Palm Beach International Equestrian Center in Wellington, Florida. The WEF, which concludes on March 29th, awards more than $13 million in prize-money through the circuit.

Cork’s Shane Sweetnam, who is based in the United States, won Wednesday’s main class on Sweet Oak Farm’s eight-year-old Zangersheide mare Zandora Z. Saturday night’s featured event is the annual battle of the sexes which offers a prize-fund of $75,000 as does Sunday’s Grand Prix.

Aryn McClure’s Irish adventure could come to a winning end 06:30
Aidan Rochford ‘loving’ being back on Wexford panel 06:00
Stats show post-World Cup years throw up more debut opportunities 06:00
Women’s football is back and better than ever 06:00
Andy Farrell sidesteps Saracens issue at Six Nations launch 06:00
Here is your handy guide to sport on television this week