Football only part of the bigger picture for Seahawks’ Carroll

Coach as concerned with developing players’ personal philosophy as winning 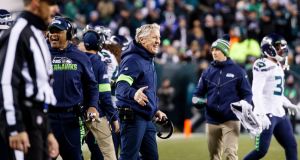 Pete Carroll: ““We have a real energy here,” he said. “That is ultimately the most valuable part of the experience.” Photograph: Justin Lane/EPA

Pete Carroll has heard the haters telling him what he can do with all his New Age banter, all that talk about self-discovery and the Seattle Seahawks’ culture of love.

He knows there’s a coach on the other side of the country with six Super Bowl rings, the guy who replaced him in New England 20 years ago. That guy obsesses about down and distance and blitz packages, and has built the model 21st-century football organisation around three words: “Do your job”.

Carroll has one Super Bowl ring.

Carroll swears that’s not how he keeps score, even though he is paid to win football games. It’s all process, he says. Don’t believe him?

“I do hear it from people, you know, ‘Stick to your coaching,’” he said last month as the NFL playoffs approached and the Seahawks tried to find their groove. “I don’t care.”

As if to prove it, there Carroll is, suddenly in jeans and a sweater and sneakers, beamed into a digital course on human performance, leading a kind of corporate group therapy discussion about the process of creating a personal philosophy for your life.

Tens of thousands of employees at Fortune 500 companies have participated in the training sessions Carroll and his partners have created to help people find purpose and perform better.

Carroll, 68, talks later about creating a vision for yourself. A vision is different from a personal philosophy, you see. He can go deep on that, if you want.

It’s Carroll, the native Northern Californian, being as Carroll as he can be, asking you to think about what it really means to excel, whether it’s winning a football game or just being a good person, and it goes a long way toward explaining what is going through his mind when he is galloping down the sideline in the middle of January, pumping his fists like a teenager.

A few facts about Carroll, whose Seahawks are four-point underdogs against the Green Bay Packers on the road at Lambeau Field on Sunday. He has seven grandchildren. He says he thinks in five-year increments and that he has no plans to leave coaching anytime soon. But no coach goes out on top, and there is this other, evolving life of his.

One of Carroll’s biggest influences is his longtime business partner, Michael Gervais, the sports psychologist who guided Felix Baumgartner on his 2012 sky-dive from space. Gervais has honed the minds of Olympians, and serves as the mindset guru for the Seahawks.

Gervais, who hosts “Finding Mastery,” a popular podcast, has a simple mantra about the Seahawks.

“We are a relationship-based organisation, rather than having an outcome-based approach,” he said. The idea – his and Carroll’s – is that strong, trusting relationships among people who are striving to be the best versions of themselves create something powerful.

Football players aren’t the only ones who have been listening.

In 2013, just as the Seahawks were getting good, Carroll spoke for an hour to marketing executives at Microsoft, whose co-founder Paul G. Allen owned the Seahawks and died in 2018, about the culture he was trying to build – one that emphasized personal growth and taking risks. When it was over, the executives wanted more.

So Carroll and Gervais got to work on a two-day curriculum that was passed around at Microsoft. In 2014, Satya Nadella took over the company with a mission to make it a place where people felt empowered to push past their comfort zone. Soon he was listening to Gervais and Carroll, and having his 12 direct reports listen, too.

It’s about the “deep commitment for the culture you are trying to create,” Kathleen Hogan, Microsoft’s executive vice president for human resources, said, explaining why the company has encouraged the curriculum to its workers. “Purpose and meaning matter.”

It’s impossible to prove that mindset training, or the other strategies that Carroll lives and coaches by, can help a company make more money or the Seahawks win more games.

Carroll gets that, but he insists that coaching should be about something bigger than wins and losses – helping people be better at life.

“We have a real energy here,” he said. “That is ultimately the most valuable part of the experience.”

Jed Hughes, an executive search consultant to the NFL, said creating a specific culture is now essential for success in the league. Players want to know the method behind the madness and that coaches care about them.

“When you feel like the person you are working for cares about you, then you are going to run through a wall for them,” Hughes said.