As USA teams give Trump the thumbs down, our GAA stars strike a blow for inclusivity 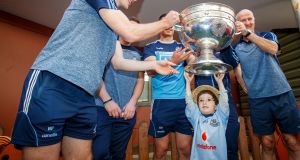 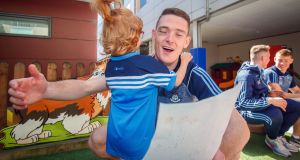 Brian Fenton is given a drawing by Zoe Lonergan, 6, from Firhouse during the Dublin team’s visit to Our Lady’s Children’s Hospital,Crumlin, Dublin. Photograph: Oisín Keniry/Inpho

There is something incredibly weird about traditions. Sometimes, we do something annually, monthly, daily, before or after a match because we know it’s been passed down from generation to generation.

Sometimes, we just do it because, well, we just do it. Sports traditions are generally the same. If you’re a Liverpool fan, you’ll sing You’ll Never Walk Alone; if you’re watching New Zealand play you watch the Haka and if you’re Irish, you just hope to see England lose and declare you’re the best fans in the world… it’s only right.

Every year, I’m struck by two different sports champions’ traditions. Last year we saw all the furore about the decision to rescind the invitation to NBA champions, Golden State Warriors, to do the traditional thing of going to the White House, to meet the president and be good old-fashioned diplomats. Steph Curry got into a weird fight with Donald Trump, Lebron James called Trump a bum . . . we all know what happened.

Then the NFL champions, the Philadelphia Eagles were also uninvited by the president. Then the WNBA champions, Minnesota Lynx, took a stand and instead did various charity events and worked on issues that were dividing America – race, gender, sexual orientation and helping marginalised groups. New traditions were being created, and old ones were abandoned.

Champions, albeit certain champions, in America were turning their backs on tradition and custom, all because, in Steve Kerr’s words to CNN: “You think about the White House visit with the championship teams, it’s a photo op, it’s a thrill, it’s everybody’s. You know, making jokes and having fun, you give the president the jersey, and that’s it. And it’s kind of a fun day . . . but times have changed . . . and it’s a human respect issue”.

And then, during the week, just as I flicked on the news to watch Dublin’s homecoming, my phone buzzed that the Washington Capitals, NHL Champions, were now in a long list of breaking traditions. And as I was reading the article written by a Capitals player, I looked up and saw Dublin midfielder, Brian Fenton getting a hug and a drawing from a young girl in Our Lady’s Hospital for Sick Children in Crumlin.

I have always been aware these visits were made to the hospital, I used to be a patient in Crumlin, and I have seen first-hand how a visitor, any visitor, is treated like royalty when they walk through the door. Sure, you may have had no idea who it was, but a break from the dull and mundane hospital world was always welcome... both for parents and for kids.

My mother recently pulled out the ugliest photo I had ever seen of myself after my operation when I was 8. I was wrapped up in wires, literally grey in the face with greasy hair and ugly round glasses that made me look like a petite version of Harry Potter’s corpse. Beside me, the sickly-looking limbless child was a boxer who came in for the day to greet the children.

Eight-year-old me had no idea, he told me he beat Mike Tyson, and he was on his way. I can still remember how cool it was, the idea that someone came and was able to give us all a break from watching a Simpsons rerun was unreal. I was so high on painkillers, you could’ve told me it was Floyd Mayweather, and I would’ve been as excited.

A few years on, I became friendly with a steward in the wheelchair section in Croke Park, same faces, same interactions and I always remembered him as the guy who took me down to see the cups and winning teams. He took a few others down too, and it was terrific. A simple act of kindness goes a long way and all that.

The coolest thing was, he’d always stay in the shadows and watch on as kids got to meet their heroes and touch the real silverware. He would always offer to take a photo of you, and your plus one with a player and he’d never expect anything in return. So, it was no surprise to me when I discovered, a few years later, he was the man that organised the visits to children’s hospitals.

In a world where everything is done for publicity or is hailed as a stunt and in a world where athletes are beginning to use their platform and be told to shut up and dribble, it’s the tradition of GAA, Camogie and LGFA champions visiting hospitals that, for me, is the greatest tradition of all.

I mentioned earlier how Steve Kerr said the presidential visit in America was a photo op for everyone, but the tradition of winners visiting the children’s hospitals is never a photo op. Instead, the visit is what teams and fans within the hospital make from it. Some are inspired by the bravery of children, some of the brave children are encouraged to keep fighting because of a particular player.

But one thing is for sure, the annual tradition and acts of kindness displayed by Francis the security guard, as I now know him, is one that’ll stay with me forever.

So, even though I joke with him he’s looking well on RTÉ News, I know it’s a selfless act by him. I know it’s a sort of accidental tradition that everyone now loves. And it’s an unintentional tradition we should all be proud of. As Steve Kerr also said it’s a human respect thing.